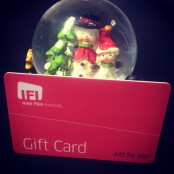 Take the stress out of Christmas this year! December is just around the corner and, as the shops get busier with festive shoppers, enjoy a more peaceful experience at the IFI Film Shop where you will find the perfect gifts and stocking fillers for the film buffs in your life.

Tucked away in the heart of Temple Bar and bursting with gift ideas this Christmas, from the best-selling Irish films of 2015 to art-house classics, and gems from the IFI Irish Film Archive to thought-provoking documentaries, at the IFI Film Shop you’ll be spoilt for choice. One of Dublin’s best specialist shops, it has an incredible range of DVDs, box-sets and film-books and its knowledgeable staff can guide you to finding a great present.

2015 was the year that saw Ireland become one the first countries in the world to publicly vote in favour of same-sex marriage and Rory O’Neill, aka Panti Bliss, became an ‘accidental activist’ and international star. The Queen of Ireland is centered around the referendum, however director Conor Horgan has been filming Rory for the past five years and the end result is one of the best-selling and most heart-warming films of the year.

Another hugely popular Irish documentary this year is Alex Fegan’s Older Than Ireland featuring 30 men and women, all born before 1916. The film is something of a landmark documentary that explores what it means to have lived one hundred years, and more, in Ireland.

Also featuring in a bumper year for Irish documentaries is Gary Lennon’s A Doctor’s Sword, the release of which coincides with the 70th anniversary of the WWII bombing of Nagasaki. Here is the almost unbelievable tale of a young man who survived some of the most harrowing episodes of World War II (including the atomic bombing of Nagasaki), and his family’s search to uncover the origin of the Japanese Samurai sword which he brought home, and which now resides in MacCarthy’s Bar in Castletownbere, Co.Cork.

A gift the whole family will enjoy is the Oscar-nominated Song of the Sea, Tomm Moore’s modern folktale where Celtic mythology sits comfortably alongside the reality of a grieving family and a heart-warming sibling relationship. With a soundtrack from Kíla, the delicately rendered, hand-drawn animation is as exquisite as anything from Studio Ghibli and is sure to delight audiences of all ages.

GAA fans can get stuck in to the newly released GAA Hurling Gold 2, showing precious highlight reels of the All-Ireland Finals from 1960 to 1968. After the massively successful release of the ’40s and ’50s footage over the last few years, the IFI Irish Film Archive is proud to present the latest in this series of DVDs, featuring newly discovered and rarely seen footage of some of the greatest players ever to lift the camán – an ideal gift for all Irish sport enthusiasts. For overseas fans, the DVD is available to buy online at www.ifi.ie/shop, as well as in the IFI Film Shop.

Some of the best arthouse hits of 2015 have already made it to DVD like Nuri Bilge Ceylan’s Winter Sleep, the deserved winner of the Palme d’Or at Cannes this year. Winter Sleep is a mesmerising, brutally honest, and quite brilliant work which positions Ceylan (Distant, Once Upon a Time in Anatolia) as a modern heir to Ingmar Bergman given his formidable insight into the human condition.

If you’re still at a loss don’t forget you can buy the gift of a year-long IFI Membership with all the discounts and benefits and starting from just €15, or buy an IFI Gift Voucher that can be used in IFI Cinema, IFI Film Shop or IFI Café Bar and topped up at any time.

For more media information and hi-res images contact Michelle McDonagh at the IFI Press Office on 01 679 5744 or email mmcdonagh@irishfilm.ie