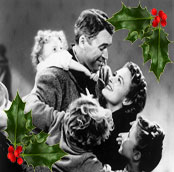 Whether it’s a festive tradition with family, or simply a couple of hours away from the hustle and bustle of the shops, the IFI has a host of Christmas classics and free archive screenings for all ages throughout December.

Essential viewing such as It’s a Wonderful Life, When Harry Met Sally… (both open December 11th),Miracle on 34th Street (December 20th) and The Red Shoes (opens December 18th), family favourites like Hugo (3D), December 27th) and Scrooge (December 19th and 20th), free festive films from the IFI Irish Film Archive or even a seasonal horror, Black Christmas (December 17th), there’s plenty to keep everyone in the spirit this Christmas!

It’s a Wonderful Life is required viewing during the Christmas period. James Stewart is at his most likeable as George Bailey, loyal family man and friend whose selfless nature has resulted in his spending his whole life in hometown Bedford Falls. When he faces ruin by despotic merchant Mr. Potter, George finds himself preparing to jump from a bridge. However, a higher power intervenes and sends Angel Second Class Clarence Odbody (Henry Travers) to show George what life in Bedford Falls would have been like had he never been born. To really get into the Christmas spirit, on Tuesday, December 15th (18.30), the IFI Cafe Bar will host a Feast Your Eyes event, pairing a screening of It’s a Wonderful Life with a specially devised seasonal main course afterwards. Tickets for this event are €20.

To honour the legacy of the recently deceased Maureen O’Hara, the IFI is delighted to present one of her most loved films, Miracle on 34th Street, which is a perennial Christmas favourite. When passerby Kris Kringle (Edmund Gwenn) complains that the man due to play Santa Claus in the Macys Thanksgiving Day Parade is unsuitable, he himself is soon persuaded to play the role at the company’s flagship store. When Kris begins to insist that he is the real Santa, a court case ensues in which everyone’s Christmas beliefs are put to the test.

When Harry Met Sally. . . is a classic holiday rom-com. Sally’s (Meg Ryan) initial encounter with Harry (Billy Crystal) sees the two parting on unfriendly terms due to their disagreement on the issue of whether men and women can ever be just friends. Over the years, the two encounter each other repeatedly, eventually becoming pals, before everything changes when they sleep together. Nora Ephron’s insightful and witty script, and the chemistry between the two leads, have ensured this remains one of cinema’s most beloved romantic comedies.

No Christmas is complete without the great Powell and Pressburger classic The Red Shoes. Vicky Page (Moira Shearer) is a young ballerina who becomes an overnight sensation in this classic backstage drama where she must choose between art and love. It remains a colourful, visual masterpiece and remarkable cinematic experience.

For the Christmas grinches and ‘bah humbug-ers’ out there, Scrooge starring Alastair Sim is showing in a brand new digital format. Filled with the requisite Yuletide ingredients, from snow covered streets to roaring fires, holly, plum pudding and carol singing, the miserly Ebenezer Scrooge is played with gusto by Sim as the actor moves easily between comedy and drama as the Ghosts of Christmas Past, Present and Future pay him a call on Christmas Eve.

For little kids and grown up kids there’s Martin Scorsese’s Hugo (3D), a magical film that is the perfect antidote to family post Christmas cabin fever. This terrific adventure-filled 3D story is about young Hugo, who lives alone in a 1930’s Paris train station. In between dodging the ticket inspector, he keeps the station clocks going and hunts for a missing key to an automaton left by his father. Along comes Isabella, whose grandfather turns out to be the great special effects inventor, George Meliès, and the pair set out to restore the great filmmaker’s reputation. Hugo has a magic that’s rare in modern movies, a real Christmas charmer!

If the festive season is a little too joyful and happy for you, Black Christmas will chill you to the core! Notable for being one of the first slasher horror films, predating both Halloween (1978) and Friday the 13th (1980), Black Christmas is set (in a nod to Frank Capra) in the college town of Bedford and sees the occupants of a sorority house terrorised by a deranged killer who enjoys taunting them with obscene phone calls.

Give the purse-strings a rest over the festive season and catch free screenings of films from the IFI Irish Film Archive throughout December. This month’s theme is Ghosts of Christmas Past, featuring Double Piquet, the rarely seen film directed by composer/director Robert Wynne Simmons (The Outcasts) that tells the story of a visitor to an Irish country house who finds himself transported back in time to the scene of a cold-blooded murder at the card table. Also on offer is Amharc Eireann: Christmas Newsreel Compilation, festive extracts from Gael Linn’s newsreels; and Christmas Morning, Tiernan MacBride’s short film that tells the tale of the folk song `Arthur McBride’. Last but not least is Not a Bad Christmas, Enda Walsh’s first film which bears all the hallmarks of his dark, domestic humour as Santa chokes, dies and is buried in the garden pond.

From the best in Irish film and T.V. to the top DVDs of 2015, from documentaries to dramas, from serials to sci-fi, there’s hundreds of gift ideas for film lovers at the IFI Film Shop which has extended opening hours right up to Christmas Eve!

Tickets for all the IFI Festive Favourites are available now at the IFI Box Office on 01 679 3477 or online at www.ifi.ie.