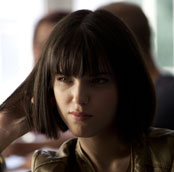 The IFI and Kinopolis celebrate the Festival’s tenth edition with one of its strongest programmes yet over 3 days from December 3rd to 6th, displaying the wealth of talent currently working in Polish cinema, from elder statesman Jerzy Skolimowski to auteur Małgorzata Szumowska to first-time director Bartosz Prokopowicz. The Festival will welcome special guest Krzysztof Stroiński, star of thriller Anatomy of Evil, who will take part in a Q&A.

Mainstream Polish cinema is represented by Krzystof Lukaszewicz’s Karbala. Set in 2004, Karbala tells the story of the largest battle Polish troops have taken part since the Second World War, is an intelligent and unsentimental example of quality Polish cinema.

First time director Bartosz Prokopowicz, draws from his own life experience in his debut film Chemo, an undeniably moving depiction of one woman’s battle with cancer.

The Animation Programme is always one of the festival’s most popular events, and this year’s begins with a trio of shorts featuring Hip-Hip and Hurra, the pink hippopotamus and purple weasel who together solve mysteries aimed at imparting knowledge of nature to children and much more….

Closing the Festival this year is Body/Ciało by Małgorzata Szumowska (Elles, In the Name of . . . ) which won the Berlinale’s Silver Bear for Best Director. Body is a complex, eccentric, and thoroughly engaging rumination on how one deals with the loss of a loved one, laced with droll black humour.