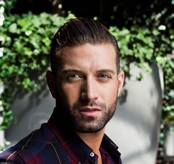 Last year Dublin welcomed Omar Sharif for the last time. This year his legacy is continued by his grandson Omar Sharif Jr., an actor and human rights/LGBT rights advocate. The IFI are delighted that he’ll be attending the Dublin Arabic Film Festival opening night screening of The Prophet on Nov 13th.

Omar Sharif, Jr. is the grandson of the late, eponymous Academy Award-nominated international film star. During his Master’s degree in Comparative Politics/Conflict Studies from The London School of Economics, he began to work in film and television roles during college breaks, and became the face of an internationally recognized beverage company. After finishing his formal education he studied acting at The Lee Strasberg Institute. In March 2012, at the request of The Advocate, Omar published a personal essay, in which he openly announced his homosexuality, discusses his Jewish roots and speaks to the realities of life in Egypt, and Omar decided to take a more serious turn towards advancing LGBTQ rights not just in the middle east, but internationally. In 2013, he accepted a position as national spokesperson for GLAAD – the largest and most powerful LGBT media advocacy organization. Omar stood as an important media ambassador for the global LGBT community throughout the US Supreme Court’s decisions on marriage equality, the Sochi Olympics, and anti-bullying initiatives worldwide. In early 2015, Academy-Award nominated director Jim Sheridan cast Omar in his The Secret Scripture, shot on location in Ireland. Omar is now focusing his time and energies trying to find a balance between his human rights advocacy work, and pursuing his acting career.

Find out more about the programme and book tickets at www.ifi.ie/daff