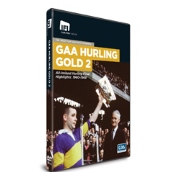 The IFI Irish Film Archive launched GAA Hurling Gold 2: All Ireland Hurling Final Highlights 1960 – 1968 DVD at Croke Park today with a gathering of former hurling greats celebrating a decade of superb action on the pitch. The GAA Hurling Gold 2 DVD is the latest release in a series of the hugely popular All-Ireland Hurling and Football highlights DVDs from the IFI Irish Film Archive, and promises once again to be one of this year’s must-have Christmas stocking fillers for GAA fans the world over. The beautifully presented DVD is priced €14.99 and is available from www.ifi.ie, the IFI Film Shop and all good retailers.

The 1960s was a decade dominated by Tipperary, who featured in seven finals and lifted the Liam McCarthy Cup four times, with competition coming from Kilkenny and Wexford who each won twice. The compilation includes rare footage of some legendary players of the game, including Tipperary’s John Doyle who can be seen equalling Christy Ring’s record of winning eight All Irelands in the 1965 match – believed lost until it was recently discovered in the IFI Irish Film Archive. Also featured is Dublin’s last appearance in an All-Ireland Hurling Final in 1961, and Cork’s magnificent 1966 win under Gerry McCarthy, after a decade in the doldrums. The collection is a wonderful piece of nostalgia and history for any GAA fan, capturing the enthusiasm of the crowds at the matches along with footage of some glamorous guests, including Prince Rainier and Princess Grace of Monaco (at the 1963 final), as well as Sean Lemass, Eamon de Valera, Jack Lynch and the actor Noel Purcell.

Announcing the release Kasandra O’Connell, Head of the IFI Irish Film Archive, said “The GAA All-Ireland Hurling & Football Highlights shot by the National Film Institute (now IFI) are amongst the most requested titles held by the IFI Irish Film Archive. The popularity of our previous releases featuring 1940s and ‘50s matches in our collection greatly exceeded our expectations, so we are delighted to follow this by making these 1960s Finals available to the public as well. In addition to allowing us to revisit legendary sporting achievements, this series of DVDs also demonstrates the vital work of the IFI Irish Film Archive in preserving and sharing our national moving image collection.”

The DVD is priced €14.99 (+p&p) and is available from www.ifibooking.ie, the IFI Film Shop and all good DVD retailers.