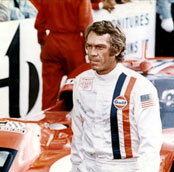 Le Mans (November 30th)
Steve McQueen plays a champion car racer haunted by the death of a friend in an accident he might have inadvertently caused. Gearing up for the Le Mans 24-hour endurance challenge, the toughest racing event in the world, he enters into an ambiguous relationship with his dead friend’s widow.

On Monday, November 30th, film fans can watch this passion project for McQueen, with its breathtakingly realised, thrillingly kinetic car racing sequences that demand to be experienced in 70mm, at the IFI, the only cinema in Ireland capable of projecting this high-quality sound and vision format.

Steve McQueen: The Man & Le Mans (opens November 20th)
It’s 1969 and Steve McQueen is at the height of his fame; the enormous success ofBullitt and The Thomas Crown Affair have made him more than a star – he’s an icon, The King of Cool. Eager to solidify his position with a move into production, McQueen set about realising a passion project, to make the ultimate car-racing film centred on the gruelling 24-hour rally in Le Mans. Little did he know hewould lose his marriage, friendships and almost his life in the process.

Viewed through the frame of the troubled Le Mans production, McQueen is revealed as a complex personality, alienating friends and colleagues with his unyielding behaviour and refusal to compromise his vision for the film. He is, however, possessed of a genuine mastery of technique when it came to capturing the thrill of the race on film.Notes by David O’Mahony.

For images and further details please contact Deirdre O’Reilly at the IFI Press Office on 01 679 5744 or email doreilly@irishfilm.ie.