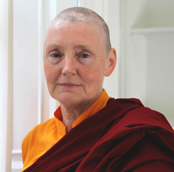 Pat Murphy  in a post-screening Q&A with Stephanie McBride on October 9th.

Varanasi on the Ganges is famous for its Muslim silk weavers whose lives are closely interwoven with that of their Hindu neighbours. For over a thousand years the skills of their trade have passed from one generation to the next. Now, however, facing globalisation and computerisation (with one automated machine doing the work of many men), thousands of small businesses are closing down. Loosely structured as a day in the life of Varanasi, the film presents a rich tapestry of characters, from intractable Hindu traders to smart young schoolgirls (who challenge prevailing Western attitudes to Muslim tradition) and many weavers in between.

This quiet, lushly hued portrait of a threatened community is underpinned by the political interrogation that we have come to expect from one of Ireland’s most respected directors, Pat Murphy (Anne Devlin, Nora), in this, her first documentary feature. (Notes by Sunniva O’Flynn.)