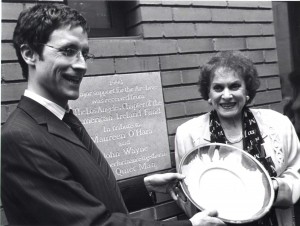 For so many film lovers, for so many decades Maureen O’Hara has embodied the quintessence of Irish womanhood . Beautiful, intelligent, feisty and flame-haired, her vivacity and her extraordinary talent were recognised by the cream of Hollywood directors and justly rewarded by her peers. Through her work with John Ford and John Wayne she created and maintained a visibility for great Irish acting talent in Hollywood. She remained loyal to Ireland spending many long, happy years in her beloved Glengariff – emerging often to lend her support to a range of cultural events all of which were elevated to stellar heights by her very presence. We were delighted to honour her in 2004 with a film programme to mark the launch of ’Tis Herself: An Autobiography and she then honoured us with her warm transatlantic message of support for our efforts at New York’s MoMA when we presented Revisiting the Quiet Man in 2011. We are greatly saddened by her passing but know that she is so deeply embedded in our collective cinema memory that she will never be forgotten.

Memories of Maureen O’Hara at the IFI in 2004