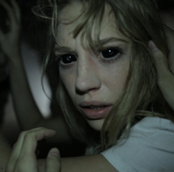 IFI HORRORTHON COMES OF AGE AS IT REACHES ITS 18TH BIRTHDAY WITH 5 DAYS OF THE MOST TERRIFYING FILMS FROM 22ND TO 26TH OCTOBER 2015!

Embrace the fear – IFI Horrorthon is back! IFI Horrorthon 2015 celebrates its 18th birthday and once again promises a superb selection of torturous treats over five days in the run up to Halloween. This year’s IFI Horrorthon Guests include director Richard Stanley, who will present his two features and some of his rarely shown shorts; scream queen, Bond girl and Hammer regular, Caroline Munro; and producer Sean Hogan and legendary illustrator Kevin O’Neill, who will attendFuture Shock! The Story of 2000AD. This year’s IFI Horrorthon Honours will be bestowed on one of cinema’s most iconic figures: Christopher Lee. Tribute will be paid also to the memory of horror maestro Wes Craven with a late-night double bill and a screening of one of his best-known classics. With 33 features (23 of them Irish premieres) and two shorts programmes, this year’s ghastly offering will draw the most macabre and demonly devoted of horror film fans!

“This year’s festival is very possibly our most exciting yet, with iconic guests attending, terrific new films, and tributes accompanied by great retrospectives. It’s definitely a year not to be missed!” Mick Fox, IFI Horrorthon spokesperson.

This year’s special guests include award-winning director and screenwriter Richard Stanley, who will be visiting IFI Horrorthon to take part in a Q&A following his distinctive and underappreciated film, Dust Devil(1992), which follows a woman pursued by a mysterious shape-shifter. Stanley will also introduce a collection of rarely seen work in a specially curated Shorts Programme and will discuss his debut, Hardware (1990), which sees a young sculptor in a post-nuclear future trapped in her apartment with a killer robot. The Festival also welcomes artist Kevin O’Neill and producer Sean Hogan who will introduce and answer questions afterFuture Shock: The Story of 2000AD (2014) which looks at the history of the cult comic 2000AD, home of Judge Dredd.

Scream queen, Hammer regular, Bond girl and star of two tribute screenings at IFI Horrorthon, Caroline Munro will introduce and take part in a Q&A following Dracula A.D. 1972, screening as part of the IFI Horrorthon Honours tribute to cinematic icon, Christopher Lee (1922 – 2015). The Hammer classic sees Lee as Dracula roaming around London, seeking revenge on the descendants of nemesis Van Helsing. The Festival also pays tribute to Lee with The Hound of the Baskervilles (1959), where he plays endangered Sir Henry Baskerville in Terence Fisher’s adaptation of the most famous of the Sherlock Holmes adventures.

Another master of the genre lost this year was Wes Craven, and his memory will be honoured by a double-bill screening of two of his lesser celebrated films which deserve greater recognition: The Serpent and the Rainbow (1988) and The People under the Stairs (1991). Craven redefined the genre many times, and his post-modern classic, Scream (1996), will be back on the big screen once again.

This year’s bloodiest of festivals opens with the Irish premiere of The Invitation, a tense and unnerving thriller which sees Will and his girlfriend attend his ex-wife’s dinner party, only to realise there are ulterior motives to her kindness. Opening night also presents the second feature from one of 2014’s Festival guests, Jessica Cameron, whose film Mania features a lesbian couple fleeing across the US after a brutal murder in their hometown. Other disturbing delights kicking off this year’s Festival include premieres of Howl, in which passengers on a late-night broken down train are forced to band together as an unseen presence starts to attack them one by one; Turbo Kid, which concerns one brave Kid who stands up to an evil overlord in this homage to ‘80s action movies; and Children of the Night, focusing on a remote orphanage populated by child vampires.

Many more Irish premieres are splattered throughout the weekend, including Last Girl Standing which follows Camryn as she tries to deal with survivor’s guilt following a massacre; Goodnight Mommy centres on twin boys who become convinced that the woman returned to them in facial bandages is no longer their mother; the irreverent and very funny Deathgasm is a New Zealand ode to heavy metal horror; the safety of a couple’s new-born son is put at risk in the chilling The Hallow; a bored accountant kidnaps his boss’ daughter only for her to take brutal revenge in Scherzo Diabolico; Eli Roth’s The Green Inferno follows a group of plane crash survivors who are left at the mercy of a tribe of savage cannibals.

Other premiere highlights include: Jeruzalem which follows two young American women when the Biblical end of days begins as they tour Jerusalem; Rabid Dogs, a remake of a Mario Bava film about three criminals who take their hostages on a violent road trip; and Tales of Halloween, which sees suburban residents terrorised by supernatural creatures in this excellent anthology.

Regulars, such as the ever-popular Surprise Film will feature in the line-up, not to mention a rare 25thanniversary screening of Exorcist III (1990), as well as the Short Film Showcase – all of which will ensure that the bloodiest of tastes is catered for!

Individual tickets for the IFI Horrorthon films are on sale now  at the IFI Box Office in person, on the phone on 01 679 3477 or online at www.ifi.ie. A new special ticket deal is available this year: 5 films for €40, 10 films for €75. A range of passes ranging from one to five days is also available for the most ferocious of devotees! Throughout the Festival there will also be a range of special offers for blood-thirsty IFI Horrorthon fans in the IFI Café Bar.

13.00 IFI HORRORTHON HONOURS CHRISTOPHER LEE: THE HOUND OF THE BASKERVILLES

16.45 DUST DEVIL
Director Richard Stanley will introduce the film and take part in a post-screening Q&A

23.00 TRIBUTE TO WES CRAVEN: THE SERPENT AND THE RAINBOW & THE PEOPLE UNDER THE STAIRS

18.30 FUTURE SHOCK! THE STORY OF 2000AD
Producer Sean Hogan and artist Kevin O’Neill will introduce the film and take part in a post-screening Q&A

14.50 HARDWARE
Director Richard Stanley will introduce the film and take part in a post-screening Q&A

Individual tickets available now for the IFI Horrorthon on 01 679 3477 or online atwww.ifi.ie/horrorthon

For more information, high-res images and interview requests with guests and the Horrorthon team contact Deirdre O’Reilly at the IFI Press Office on doreilly@irishfilm.ie or call 01 679 5744