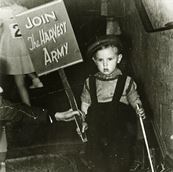 In this month’s blog from the IFI Irish Film Archive’s Tiernan MacBride Library we focus on the Irish Film Archive’s incredible image collection. Containing a vast array of film stills and photographs, the collection is a treasure trove of fascinating images which trace the history of Irish cinema and television. For the purposes of today’s blog, we have chosen just six images from the thousands that can be viewed within the library, providing an insight into the staggering scope of the collection.

This startling image is taken from footage of singer Petula Clark’s visit to Dublin Zoo in 1952. Clark (who achieved global stardom with the hit Downtown) is pictured here with a chimpanzee that has been given a cigarette, ‘to thank him for his participation.’ [1] The Dublin Zoo Collection, housed in the Irish Film Archive, is mainly comprised of footage shot between 1956 and 1984 by its former director, Dr Terry Murphy. The earlier footage contains scenes depicting chimpanzee tea parties and orangutans in prams, reflecting a desire to humanise animals for public entertainment. It is a visual reminder of how society’s attitudes to animals have changed and starkly contrasts with Dublin Zoo today, where animals are maintained in open spaces which are based on their natural habitats. Them in the Thing is an amateur science-fiction drama filmed in 1954 by Irish aristocrat Desmond Leslie. Leslie was a lifelong UFO enthusiast who wrote a bestseller in 1953 entitled Flying Saucers have landed. [2] The well-known English astronomer and UFO sceptic Sir Patrick Moore makes a cameo appearance in the film and Leslie’s children play aliens who arrive in a flying saucer and infiltrate Castle Leslie. Eschewing the hubcaps and lampshades traditionally employed to depict flying saucers in 1950s B-movies, Leslie uses a Spanish Renaissance shield to create his UFO. With the help of some fishing line and a mirror held by his son, Co. Monaghan experiences its very own alien invasion, captured here in this wonderful image. [3] As is immediately apparent in this arresting picture, Francis Ford Coppola’s first mainstream film was heavily influenced by Alfred Hitchcock’s Psycho.  The feature, unashamedly dubbed an ‘exploitation film’ by Coppola, was filmed in Ireland and was produced by the legendary Hollywood B-movie producer Roger Corman. [4] Howth Castle is used to depict the fictitious Castle Haloran in a tale brimming with family treachery, axe-murders, psychological suspense and supernatural events. The film performed well at the box office and was generally well received. Coppola has recounted his delight at one particular New York Times review referring to his ‘solid direction,’ which prompted him to call his brother – ‘no, dope, it’s “stolid” not “solid”,’ his brother responded. [5] The footage for this documentary was filmed by Colm O Laoghaire during the Harvest Emergency in Ireland in 1946. It covers a period when hundreds of thousands of people across Ireland joined the nation’s farmers to help rescue crops threatened by flooding. The new documentary intercuts the previously unseen footage with interviews of the participants who took part in the voluntary harvest scheme over fifty years earlier. The shadow of the Great Hunger loomed large and over 125,000 volunteers passed through the Dublin bureau alone to work with Ireland’s farmers. Scenes show the Irish Red Cross providing food for volunteers who are bussed out from Dublin to the country. This evocative image shows one young volunteer who is doing his part to highlight the scheme. This beautiful image is a still from the short animated film Among Strangers, which won an award for Best Animation in the Aubagne Film Festival in 2005. [6] The film’s director Naomi Wilson used drawings made in sand from a local beach in West Clare to create the piece, employing a sand-on-glass technique of animation. The film is adapted from a story in David Thompson’s book People of the Sea, Celtic Tales of the Seal-Folkwhich recounts an actual event from the author’s childhood. The child in the story witnesses the death of a seal at the hands of a fisherman. The story the fisherman then recounts to him about selkies and the seal-killer Aengus Ruadh is a cautionary folk-tale filled with magic and wonder which introduces the child to the complexities of adult behaviour. This striking picture dates from the 1940s and is drawn from the collection of Michael McDonagh, whose archive of family photographs forms the basis for the documentary The McDonagh Pictures. In the film, McDonagh traces the history of the McDonagh, Quinn-McDonagh and Joyce Traveller families as far back as the 1930s, giving a remarkable insight into their changing lives and fortunes. Michael McDonagh himself has been taking and collecting photographs of his family and friends for thirty years in an effort to preserve their largely undocumented histories and images. The film focuses on the stories and memories of Michael McDonagh and his wife Nell and on the lives of Nell’s parents, Mikey and Bobbie Quinn McDonagh.