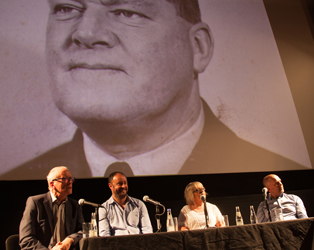 We were delighted to to welcome director Gary Lennon, producer Bob Jackson and Niki MacCarthy (Aidan’s Daughter) who attended the opening night of screening  A Doctor’s Sword on August 7th and took part in a post screening Q&A with host John Kelleher.

Coinciding with the 70th anniversary of the WWII bombing of Nagasaki, here is the almost unbelievable tale of a young man who survived some of the most harrowing episodes of World War II (including the atomic bombing of Nagasaki), and his family’s search to uncover the origin of the Japanese Samurai sword which he brought home, and which now resides in MacCarthy’s Bar in Castletownbere. Aidan MacCarthy, was a young doctor, who, at 28, joined the RAF in London just as the War began. He was evacuated from Dunkirk and in May 1941 received the George’s Cross for rescuing the crew of a burning RAF plane. He volunteered for service in Asia as Singapore fell to the Japanese, was captured in Java and survived almost four years of brutal captivity as a prisoner of war. Here is an extraordinary story of heroism and resilience.