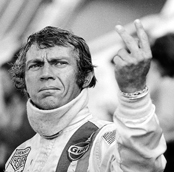 The newly rebranded and enlarged IFI Documentary Festival is back once again with the world’s best selection of factual films from 23rd- 27th September 2015. One of the IFI’s flagship festivals, the IFI Documentary Festival (formerly IFI Stranger than Fiction) will screen 14 feature length documentaries, with 1 world premiere and 10 Irish premieres. It will also welcome a host of special guest filmmakers from Ireland and abroad, alongside a series of special events; and will continue on the success of last year’s highly successful Industry Day, in partnership with Bord Scannán na hÉireann/the Irish Film Board, which will give filmmakers the opportunity to network with leaders in the field.

This year’s highlights include a look at Steve McQueen’s ill-fated motorsport feature Steve McQueen: The Man & Le Mans; a timely look at U.S race and gun violence in 3 1/2 Minutes, Ten Bullets; the story of Orion…, an impersonator who fuelled rumours that Elvis never died; and a newly rediscovered survey of pre-boom Dublin, Bargaintown.

IFI Director Ross Keane said: “We’re delighted to announce details of our annual documentary festival at the IFI, this year returning better than ever with a new name and extended to run over an extra day and night to cater for the increasing demand. Documentaries form a key part of the IFI’s exhibition programme throughout the year, and this annual festival provides us with the opportunity to put an extra spotlight on this important form of filmmaking, bringing a range of fascinating stories from Ireland and around the world to our audiences.”

This year’s gala opening night film Steve McQueen: The Man & Le Mans, tells a candid, witty and insightful study of the screen idol’s fascination with motorsports and his commitment to make a film about French endurance race Le Mans – a huge folly and a commercial flop. Sharing the same love of cars but a world away from McQueen’s glamorous lifestyle, Speed Sisters looks at the West Bank speed car racing scene which has flourished in recent years and at an all-female racing team who are breaking through in this male-dominated sport. Staying with sport, the allure of the boxing ring for documentary makers has always been strong and filmmaker Bert Marcus’ Champs, shows there are still many stories worth telling. Focusing on three American champions – Tyson, Holyfield and Hopkins – Marcus’ absorbing film presents boxing as a facilitator of the American Dream, but nevertheless has the courage to confront some serious failings in the sport.

This year’s selection of Irish documentaries includes the world premiere of Dearbhla Glynn’s War in Eastern Congo which highlights the community impact of the devastating ongoing conflict which has claimed the lives of 6 million and seen the use of rape as a widespread weapon of war. Dearbhla Glynn will take part in a Q&A post-screening. Bargaintown, a rediscovered portrait of Dublin in the pre-Tiger era was made by German filmmaker, David Jazay in 1988, and is a powerful record of the lives and opinions of a vanished city; showing an auction at Tormey Brothers’, a night of song and dance at the old Workingmen’s Club on Wellington Quay and performances by veteran bluesman Frank Quigley. David Jazay will take part in a Q&A after the screening of this special record of the city that has never been seen in Dublin before.

Other Irish documentaries featured in the Festival are Loïc Jourdain’s A Turning Tide in the Life of Man, which follows island fisherman John O’Brien’s campaign to try to regain his ancestral right to fish the seas around Donegal, and will be screened in the presence of Minister of State at the Department of Communications, Energy and Natural Resources, Joe McHugh, followed by a Q&A with the director. Short Irish documentaries are also celebrated and promoted at the festival with a programme that premieres the films from Bord Scannán na hÉireann/the Irish Film Board’s Reality Bites programme alongside the best independent submissions from around the country.

Two of the biggest news stories on either side of the Atlantic this year are examined in a fresh light in the Festival: immigration in Europe and the struggle against racially-aggravated gun violence in the U.S. David Aronowitsch’s I Am Dublin, focuses on Ahmed, an asylum seeker trying to build a life in Sweden but who is hamstrung by the EU Law known as the Dublin Regulation. 3 ½ Minutes, Ten Bullets looks at the shooting of a black American teenager during the consumerist clamour of Black Friday 2012 by a white man who claimed he acted in self-defence. This probing, pertinent film tries to unravel the truth as it follows the long and divisive trial that followed. Winner of the Grand Jury Award in Sheffield Doc/Fest, A Syrian Love Story by Sean McAllister (Reluctant Revolutionary) looks at the contemporary conflict in the Middle East, through the prism of two Syrian activists over five tumultuous years, from meeting and falling in love whilst incarcerated for crimes against the state, to later trying to raise a family in a country that has descended into chaos.

Jeanie Finlay, who opened the 2013 Festival with The Great Hip Hop Hoax, will return to this year’s festival to take part in a Q&A after the screening of her latest film Orion: The Man Who Would Be King, which in her characteristic style salvages a fascinating tale from the amnesia of the music industry. Telling the story of Jimmy Ellis who was dismissed as sounding too much like Elvis but found a dubious kind of fame after the King passed away. With his masked act ‘Orion’, Ellis helped fuel rumours that Elvis was still alive.

Documentary pioneer Albert Maysles (Grey Gardens, Salesman) sadly died in March and In Transit is his final film. Depicting life aboard The Empire Builder, America’s busiest long-distance train route, in trademark observational style, it captures all human life and the beating heart of America. There will be a post-screening Q&A with Producer and Executive Director of the Maysles Documentary Center, Erika Dilday.  Another master filmmaker contributing work to this year’s festival is Chilean director Patricio Guzman (Nostalgia for the Light) whose new film The Pearl Button uses his country’s inescapable geographic entanglement with water and the sea  to explore in poetic, essayistic style, key moments in Chilean history from the brutal colonial era to Pinochet’s dictatorship and beyond. Vibrant Russian documentary Cinema: A Public Affair celebrates a passionate advocate for film culture: Naum Kleiman, director of the Moscow Film Museum and an internationally renowned Eisenstein scholar. His reputation is such that when in October 2014, the Russian Minister of Culture fired him, the entire staff of the Museum handed in their resignations.

The Festival, in partnership with Bord Scannán na hÉireann/the Irish Film Board, will be presenting a selection of special industry events that foster talent, create international connections and bring filmmakers and audiences closer together. Two stand-alone panels are currently available: Radharc Restored: A Case Study in Restoration, and Women in Film and Television: Telling Tales; and a Documentary Industry Day that will include seminars, panels and the chance to network with international producers and programmers. Details will be announced shortly.

Tickets are priced €9.50 except for the opening film which includes a post-screening reception and costs €13. Daily Membership costs €1 for Non-Annual Members and will be added to the ticket price. Special Events cost €5 Enjoy more of the Festival for less with a special package price of 5 films for €40 – available in person only..

For more information, images and interview requests with filmmaker guests please contact Patrick Stewart at the IFI Press Office on 01 679 5744  or pstewart@irishfilm.ie.