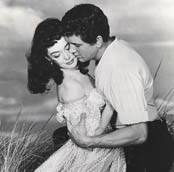 One Sunday a month the IFI’s Hangover Lounge offers audiences the opportunity to enjoy a tasty brunch paired with two great films. This month’s classic double bill on Sunday 30th Augustfeatures Marlon Brando’s electrifying performances in A Streetcar Named Desire and On the Waterfront.

In the IFI Irish Film Archive’s Tiernan MacBride Library blog this August we remember the eventful time Marlon Brando spent in Ireland while filming the ill-fated Divine Rapture. We also look at the colourful stories surrounding other legendary Hollywood actors who starred in Irish-filmed productions.

In 1943, the Powerscourt estate in Co.Wicklow became Agincourt for the battle scenes of the epic film Henry V. Laurence Olivier, who was producer, director and star of the film, endeared himself to the film’s 700 Irish extras by ordering them a glass of Guinness after each successful day of shooting. [1] The director promised the cast he wouldn’t ask them to do anything he would not undertake himself and subsequently found himself demonstrating how to jump from a tree onto a passing horse, a feat he carried out with aplomb. [2] Olivier was injured on set when he directed a horseman to gallop straight towards the camera he was looking through. The horse failed to veer away and the collision left a permanent scar on the star’s lip, which he disguised with a moustache. [3] In this comedy thriller, Deborah Kerr plays a naïve Irish patriot who is recruited by the Nazis in WW2 England. Irish scenes shot in Dundalk, Dublin and Wexford feature actors from the Abbey and Gate theatres as well as the poet Patrick Kavanagh. [4] Kerr was praised for her poise during scenes filmed in Trinity College, when the cast was unexpectedly surrounded by hundreds of cat-calling students. [5] While filming in Ireland, Kerr became engaged to her future husband, ex-RAF fighter pilot Anthony Bartley. [6] She was introduced to Bartley by the actor Stewart Granger, who was later to maintain in his biography that Kerr seduced him in a taxi in 1944. When queried about the claim, Kerr would only wryly remark with her customary composure, “what a gallant man he is!” [7] In this film Rock Hudson plays Captain Lightfoot, a peasant in 19th century Ireland who becomes a highwayman to fund the rebel cause against England. Shot in Louth, Wicklow and Dublin, it was the first American film to be made entirely in Ireland. [8] It has been reported that Hudson’s agent convinced Universal executives to shoot in Ireland in a bid to separate the star from his partner Jack Navaar. [9] The tabloid press in America had been threatening to expose their relationship, something which would have ended Hudson’s acting career. However, the Limerick newspapers in 1954 portray a light-hearted Rock Hudson who playfully divests the leader of the Limerick Pipe band of his busby and leads the troupe merrily down the street. [10] Robert Mitchum stars as an Irish republican activist during WW2 in this adventure melodrama, filmed in Dublin and Wicklow. He turns informer against the IRA when a local leader refuses to rescue his imprisoned friend Sean (Richard Harris). Certified hell-raisers, Mitchum and Harris’s bouts of drinking and brawling together in Dublin were widely reported in the press at the time. One incident occurred when a fan demanded an autograph from Mitchum, mistaking him for Kirk Douglas. Mitchum scribbled an expletive, signed it “Kirk Douglas” and was promptly punched by the offended party. Mitchum shrugged off the blow but Harris and his fellow actors became involved in the fracas which quickly descended into “a melange of flying fists and broken bottles.” [11] Divine Rapture, “the greatest film never made” [12] was set to star Marlon Brando, Johnny Depp and Deborah Winger. Brando was to play a priest who believes in miracles but the production ran into financial difficulties and shut down after three weeks of shooting in Ballycotton, Cork. Brando’s grandmother was Irish and he was raised by an Irish nurse who regaled him with romantic tales of Éire. Soon after his arrival in Ireland the star shaved his head and reportedly donned an orange clown wig in an attempt to embody his idea of true Irishness. [13] One young actress recalled how Brando fell asleep on set one day during filming. At 72, Brando retained a presence and star status so commanding that shooting for the film completely shut down around him until he awoke. [14]