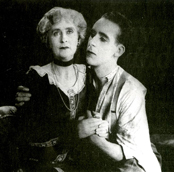 July in the IFI saw the screening of Robert Flaherty’s short film Oidhche Sheanchais, the first Irish-language “talkie” ever made.  Recorded during the production of Man of Aran in 1934, the film was believed lost in a fire that destroyed all known copies in 1943. [1] Almost 70 years later, a nitrate print was discovered in the Celtic Studies Department in Harvard University and was carefully restored by the Harvard Film Archive.

Ireland a Nation blends drama and newsreels to tell the story of Ireland’s struggle for independence, from the 1798 Uprising to Home Rule in 1914. The first prints of the film sent to Europe sank with the Lusitania [2] and it wasn’t shown in Dublin until 1917, nine months after the Easter Rising. [3] Audiences shouted “up the rebels!” during screenings [4] and the film was banned by the military authorities in Ireland. A print of the original film has yet to be located. The film was re-released in the US in 1920 updated with newsreels dating from 1914-1920. Only incomplete copies of this version survive in the Library of Congress, Washington. A print was purchased from there by Seamus de Búrca, son of the film’s co-writer P.J. Bourke and was deposited in the Irish Film Archive for preservation. The film was then digitised by Trinity College Dublin for TCD’s Irish Film & TV Research online project in 2011 and can be viewed online. Irish Destiny is a romantic melodrama set during the Irish War of Independence. It follows IRA member Denis O’Hara who is involved in a shoot-out, races through Dublin streets on a motorbike and escapes incarceration in the Curragh Camp in time to rescue his true love. Ex-IRA members act in the film [5] which includes footage of the Black and Tans; the burning of the Customs House (1921) and of the burning of Cork (1920). The film broke box office records here but was poorly received in America, was banned in Britain and bankrupted its Irish producer, Isaac Eppel. Believed lost for decades, a copy was found in the Library of Congress following a worldwide search by the IFI Irish Film Archive. The unstable nitrate print was transferred to safety film by the Library of Congress. The restored film, featuring a newly commissioned score by Mícheál Ó Súilleabháin, has been presented by the IFI with live orchestral accompaniment on several occasions and released as a DVD. In Beloved Enemy Lady Helen Drummond falls in love with Dennis Riordan, leader of the Irish revolutionaries. She brings about a truce between the British forces and the rebels, but Riordan is branded a traitor to the Irish cause and is shot by one of his former comrades. The story is said to have been based on the alleged love affair between Michael Collins and Lady Lavery at the time of the signing of the Anglo-Irish treaty. [6] The original release featured an unhappy ending but the film went on commercial release with a happier ending more likely to please Hollywood audiences. A nitrate copy of the film found in the Limerick Film Archive is the only known surviving print to exist with the original tragic ending. [7] The IFI Irish Film Archive restored the film with a grant from the Heritage Council and its screening was one of the highlights of the 50thCork Film Festival in 2005. This Oscar-nominated short was produced by Paramount Studios in Ireland in 1955. Promoted as a documentary about hurling, “fifteen wild men on a side racing around a cow pasture” [8] it is in fact a mostly fictional story narrated by the hero of the piece, Colm Gallagher. He is given the chance to play for his county and the film features Cork County’s All-Ireland winning team. The piece was nominated for an Oscar in March 1956 but the actors were unaware of this until the film premiered in Ireland three months later. [9] The film is light-hearted, referring to broken bones and concussions suffered by players as “mishaps.” It portrays an idealised rural Ireland and the congratulatory kisses received by the hero from his beloved occur modestly off-screen. Los Angeles-based Irish collector Paul Balbirnie donated this rare print to the IFI Irish Film Archive and no other known copy exists. This warm drama follows the adventures of Bridget Monaghan and her six illegitimate children, who are a source of embarrassment for their fathers. They plot against the family but one of the men proposes to Bridget and the film ends happily. The film draws on the novel “We are Seven” by Una Troy, based on the true story of unmarried mother Moll McCarthy in 1930s Tipperary. She was murdered in 1940, and her neighbour Harry Gleeson was hanged for the crime. [10] He was recently exonerated and received a posthumous pardon from the State. The film was dubbed “a travesty of Irish life,” [11] and it wasn’t released in Ireland. It was feared lost until academic Ann Butler found a decomposed copy in the collections of film distributor Canal Plus. A new stable safety copy of the film was generated from the original Technicolour print for the IFI Irish Film Archive and was screened at the New York Museum of Modern Art’s Festival of Film Preservation in 2005. Promotional poster for She Didn’t Say No.

The information in this blog is drawn from the IFI Irish Film Archive’s clippings, image, document and book collections. These collections contain thousands of files, images and articles relating to all aspects of Irish and Irish-interest film and television production. They are available to view in the Tiernan MacBride librarywithin library opening hours, or by appointment with the IFI librarian. All of the productions discussed in this article form part of the IFI Irish Film Archive’s Film Collections and they are available to view by appointment. Please direct all queries regarding the viewing of films to the IFI Irish Film Archive’s Moving Image Access Officer. More information about Irish Destiny can be found in the IFI’s Irish Film Directory which is a valuable resource for Irish cinema research.