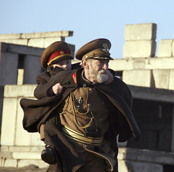 We were delighted to welcome to the IFI director Mohsen Makhmalbaf to talk about his film The President at a special preview screening hosted by Michael Hayden (IFI Head of Programming) on Monday July 13th. Listen Below!

About the film
In an unnamed state ruled by an ageing, despotic dictator, revolution is afoot. The President sees his wife and children to the aeroplanes that will escort them to safety, but his strong-willed young grandson refuses to get on board, insisting that he stays with his beleaguered grandfather. Driving back to their palace, they witness street battles and the army becoming mutinous, a situation which leaves the president and his young charge isolated, abandoned and afraid. Disguising himself in the ragged clothes of the poor who were once subjected to his tyranny, the president looks to escape those braying for his blood.

The President is a vibrant and thrilling film inspired by recently fallen Arab dictatorships. Master Iranian filmmaker Mohsen Makhmalbaf has created a tense and timely allegorical tale about how power corrupts that is infused with a telling, satirical sense of humour.

The President opens on July 17th