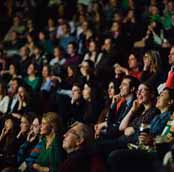 As IFI International celebrates 10 years, we bring you the latest news from our Irish film programming services department, including our panel at this year’s Galway Film Fleadh, and new programmes and festivals to keep an out for!

With support from the newly founded Culture Ireland, IFI International was launched as Reel Ireland in 2005, building on a long history of IFI collaboration with international exhibitors. That year we worked with 9 partners in 8 countries. Today as we celebrate our 10th anniversary we facilitate over 100 events annually in 50 countries world-wide. Irish Film Programming:
Two new programmes, primarily drawn from the IFI Irish Film Archive collections, are available to exhibitors this year. The Yeats 2015 film programme includes a range of films celebrating the 150th anniversary of the birth of W.B. Yeats. In celebration of the Irish Year of Design 2015, the IFI will curate programmes focusing on Irish craft and Irish design from Sybil Connolly to Waterford Glass and beyond. For more information on both of these programmes, contact Soracha Pelan Ó Treasaigh.

Irish experimental film programme, Absences and (Im)possibilities, in partnership with Lux, continues to tour and is available to exhibitors.

Remember to keep an eye on the IFI Irish FIlm Directory for updates, and a there are a host of new Irish films screening at the Galway Film Fleadh.

Summer highlights:
In celebration of Bloomsday, Ballymun Lullaby screened in Ottawa, Canada, The Dead in The Slovenian Cinematheque in Ljubliana, Slovenia and Pat Murphy’s Nora in Hungary. European Film Festivals organised by the international Irish Embassy network present Irish film to new audiences in non-European territories. Recent events include Run and Jump in Uganda, Once in Vietnam, Parked in Argentina, and Calvary in Singapore.

The Odessa International Film Festival host a tribute to Jim Sheridan as he personally presents a retrospective of his work, screening In America, In the Name of the Father, My Left Foot and The Field, July 10th – 18th.