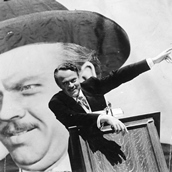 July’s Hangover Lounge at the IFI marks the centenary of Orson Welles’ birth with an unmissable double bill on July 26th. It’s a chance to spend an indulgent afternoon at the cinema combining a tasty brunch from the IFI Café Bar with two of Welles’ finest works from 35mm prints.

Citizen Kane (14.00), Welles’ debut, is one of the most influential films ever made. Following the death of newspaper magnate Charles Foster Kane, a reporter interviews those who knew him, trying to find the man behind the legend.

In what would become a regular occurrence throughout Welles’ career, The Magnificent Ambersons (16.15), in which the fortunes of the titular family suffer a decline in the age of the automobile, was hampered by studio interference. It is to his credit that what remains is regarded as one of his best works.

Build your own ideal Sunday afternoon from the following options and remember booking is available in person at the IFI Box Office or on 01 679 5744 only and is not available online.

Whet your appetite by checking out the menu online HERE

*Brunch is served 12-4pm. Terms, conditions and supplements apply to this offer.

For more information and high-res imagery please contact Patrick Stewart at the Irish Film Institute on 01 679 5744 or email pstewart@irishfilm.ie.