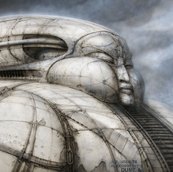 Documentary explores one of the greatest films never to be made, Jodorowsky’s Dune

IFI Docs presents a long-awaited Irish screening of Jodorowsky’s Dune on June 19th at 20.30. Frank Pavich’s superb documentary detailing Alejandro Jodorowsky’s attempt to adapt Frank Herbert’s sci-fi novel Dune is a rare and brilliant thing, a film about imagination and creativity which is itself imaginative and creative. Following the cult success of El Topo and The Holy Mountain, Jodorowsky aimed high with his next project, embarking on a madly ambitious film that would end in frustrating failure and years in the creative wilderness.

Revisiting documents and recollections from the time, Pavich manages to give a tantalising glimpse of what might have been, suggesting Jodorowsky’s Dune was a lost masterwork from one of cinema’s true visionaries.

Tickets for Jodorowsky’s Dune are available at the IFI Box Office in person, on 01 679 5744 or online at www.ifi.ie

For more details and high-res images please contact Patrick Stewart at the IFI Press Office on 01 679 5744.