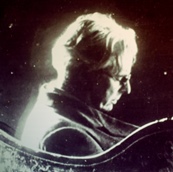 W.B Yeats remembered on film at the IFI this June

W.B Yeats remembered on film at the IFI this June

This June the IFI will celebrate the 150th anniversary of the birth of the great Irish writer (on June 13th 1865) with Images from a Past Life: W.B Yeats on Film, a programme which includes a special screening of a biographical ‘film poem’ from Alan Gilsenan and a series of short film programmes that will run throughout the month in our FREE Archive at Lunchtime strand.

On Yeats Day June 13th at 14.00, the IFI will present Alan Gilsenan’s cinematic and avowedly experimental ‘film-poem’ A Vision: A Life of W.B Yeats. Describing his film Alan Gilsenan said, ‘Using solely the words of Yeats, the film takes the viewer on a cinematic journey into his extraordinary imagination – an unconventional biography of sorts. Beyond the poet’s popular profile and his cultural tourist cachet, little is really known of his complex life, despite having articulated it so completely and so creatively.  In so many ways, Yeats dreamt up his life. He fashioned his own majestic screenplay and we are – endlessly – the beneficiaries. ‘

Alan Gilsenan will be present at the screening of this film which was made as part of Reel Art– an initiative of the Arts Council, Jameson Dublin International Festival and Filmbase.

Programme 1 is a short film montage including an extraordinary amateur film provided courtesy of Ann Saddlemyer (biographer of Yeats’ wife George) – Yeats and Friends at Hotel Gardens at Algeciras (1928), Tim Booth’s psychedelic animation based on ‘The Lake of Innisfree’  and a new film from Thaddeus O’Sullivan commissioned by Yeats 2015 The Song of Wandering Aengus.

Programme 3 W.B Yeats A Tribute is an elegant and austere 1950 documentary that follows Yeats’ time in Sligo, Galway, Dublin and London. Courtesy of the Cultural Section, Department of Foreign Affairs.

Programme 4: Coole Park and Ballylee (1976) is an exploration of the serenity of Lady Gregory’s home in Co. Galway where Yeats was a frequent visitor.

For more information or interview requests, please contact Patrick Stewart at the IFI Press Office on 01 679 5744 or email pstewart@irishfilm.ie.