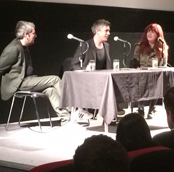 Following an exclusive preview of their new film, Still, at the IFI last Thursday, May 14th, actor Aidan Gillen (Game of Thrones, The Wire, Love/Hate) and director Simon Blake spoke to The Irish Times‘ Tara Brady about making the feature.

About the film
Tom Carver (Aidan Gillen) is still struggling to come to terms with his grief a year on from the death of his teenage son. Once an aspiring artist, he’s reduced to taking school photographs of incompliant kids. He finds some comfort in booze and a burgeoning affair with a beautiful younger woman Christina (Elodie Yung), though his other relationships aren’t especially healthy.

His best friend is Ed (Jonathan Slinger), a cynical newspaper reporter and fellow lush, while his ex-wife Rachel (Amanda Mealing), the mother of the dead boy, can only offer straining pity and withering condescension. On a trip to the off licence from his shabby North London abode, a feud with a teenage gang develops, destabilising Tom further and setting him off on an increasingly dangerous path. The debut feature from Simon Blake is an atmospheric psychological thriller with realistic bite and Gillen is mesmerising at the centre of the film.

Listen to the interview here: