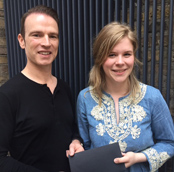 Julia O’Mahony has been named winner of the IFI Pete Walsh Critical Writing Award for her review of Skip Kite’s 2014 film Tony Benn: Will & Testament.

The IFI Pete Walsh Critical Writing Award is an annual award inspired by the late, esteemed IFI programmer Pete Walsh. Reflecting Pete’s passion for good writing about film, the award recognises an outstanding piece of critical writing on any one film theatrically screened in Ireland during the previous calendar year. The winner receives a year’s unlimited entry to films at the IFI.

Chairman of the Judging Panel Tony Tracy, Lecturer in Film Studies at Huston School of Film, NUI Galway said ‘We were really pleased by the number and quality of entries this year. While there were a number of fine efforts that competed for the top spot, the judges felt that Julia O’Mahony’s review of Tony Benn (Will and Testament) was the standout entry in terms of its originality in choice of film and the quality of its writing and analysis. We’re delighted to congratulate her as this year’s winner and look forward to the competition going from strength to strength.

You can read Julia O’Mahony’s winning entry on the IFI website here. For more information and to check for updates about next year’s competition visit www.ifi.ie/writingaward