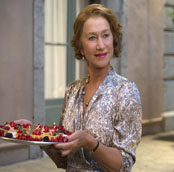 Wild Strawberries, the IFI’s film club for over 55s, teams up once again with access>CINEMA and Bealtaine, the annual May festival which celebrates creativity as we age, to present a number of special film screenings including the launch of the 2015 access>CINEMA Bealtaine Film Tour.

For 2015, the Bealtaine festival theme is inspired by Homer’s Odyssey, in which Odysseus returns to find that he does not recognise his homeland. Bealtaine participants are invited to look at Ireland through new eyes and to ask, ‘What land or country is this?’ With this in mind, the films selected feature characters who find themselves in new and sometimes strange environments, or where the filmmaker offers a view of Ireland, formed by looking from the outside in.

Starting the access>CINEMA Bealtaine Film Tour at the Wild Strawberries Film Club on 1st May at 11am is The Hundred-Foot Journey by Lasse Halleström in which Helen Mirren plays the feisty proprietor of Le Saule Pleureur restaurant who finds her longstanding culinary reign threatened by the opening of Maison Mumbai. Sparks fly between the foodies…

The Bealtaine events at the Wild Strawberries Film Club continue in May with Daisy Asquith’s After the Dance on May 13th at 11am. Daisy Asquith will be present for this screening of her affecting documentary, in which she travels to Ireland to uncover the roots of her mother who was adopted by an English family from an unmarried couple in Co. Clare.

Rounding off the season on May 27th & 29th at 11am is John Michael McDonagh’s superb 2014 hit Calvary with a towering performance from Brendan Gleeson heading up a glittering cast. Offering a distinct view of Ireland, this film looks at the Catholic Church in Irish society and the difficulties of one priest following an alarming confessional revelation. Not for the faint-hearted, Calvary prompts both character and viewer to contemplate ‘What land and country is this?’

Tickets are priced at the normal €3.85 Wild Strawberries ticket price (includes a free regular tea/coffee). Book through the IFI Box Office on 01 679 3477 or www.ifi.ie

Wild Strawberries is open to all aged 55 and over. If you’re lucky enough to look under 55, please don’t be offended if you’re asked to confirm your age.

For more information on the 2015 national Bealtaine Film Tour, please contact access>CINEMA on 01 679 4420 or info@accesscinema.ie

The IFI and access>CINEMA acknowledge the financial support of the Arts Council.