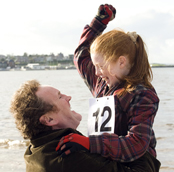 See Irish and be Irish (even for a day) at the IFI this March with a selection of St. Patrick’s events including once-banned 1968 film about a Dublin Casanova (now rated just 12A); the return of a festival hit documentary on Roger Corman; IFI Family Film The Race; and a series of FREE Archive at Lunchtime screenings celebrating Seachtain na Gaeilge.

What better way to celebrate Irish culture with a series of Irish film events running at the IFI during March 2015? Right in the historic centre of Temple Bar, it’s a great place to revel in Irish film heritage in the cinemas, enjoy a drink at a whiskey tasting evening or a scrumptious dish from the IFI Café Bar’s special St. Patrick’s Day menu.

This month’s From the Vaults screening of Paddy on St. Patrick’s Day at 4pm features Des Cave as an amorous Dublin butcher boy who spends most of his time seducing women  including well-heeled widow Mrs. Kearney (Maureen Toal) and sweet girl Maureen (Dearbhla Molloy) – and swilling pints in Mulligan’s with his good friend Harry (Milo O’Shea). Based on the notorious novel Goodbye to the Hill by Lee Dunne, the film was banned in 1968 by the Irish censor because of its sexual frankness. Since the IFI acquired a print in 2006, it has been reclassified – this time as a 12A!

Paddy was also an early appearance from B-movie legend Roger Corman who produced the film. Corman’s later, more extensive involvement in the Irish film industry is now recorded in Brian Reddin’s documentary It Came From Connemara!! which screens as this month’s   Ireland on Sunday on March 15th at 1pm. A big success at the IFI Stranger Than Fiction Festival in 2014, this film makes a welcome return, chronicling the story of Corman’s ‘90s studio in Galway and the 20+ films he made there with titles such as Bloodfist VII , Spacejacked and A Very Unlucky Leprechaun. It’s a wryly affectionate and utterly enjoyable homage to the man and his oeuvre.

IFI Family on March 15th 11am brings The Race back to the cinema screen in association with St. Patrick’s Festival. This warm-hearted and humorous film from 2009 tells the story of 11-year-old Mary who dreams of being a racing driver, despite the opposition of her parents (played by Colm Meany and Susan Lynch) and the local community.

If you’re looking for something a bit more grown up on the eve of the holiday, the IFI Café Bar will be hosting a special whiskey tasting and food pairing evening on March 16th (tickets are available for €25 by calling Sharon Corrigan on 01 679 5744). The IFI Café Bar will also be producing a special menu on St. Patrick’s Day featuring some staple Irish dishes, such as Beef and Guinness Stew and Bacon and Cabbage.

IFI Archive at Lunchtime will celebrate Seachtain na Gaeilge all through the month with two FREE lunchtimes programmes of Irish language shorts from the IFI Irish Film Archive screening on  Mondays and Wednesdays, with a double bill on Saturdays. March’s shorts include Amharc Éireann newsreel on Gael Linn’s efforts promoting the Irish language (1959-‘64), a British film exploring Gael Linn’s efforts to stem the flow of emigration from Gaeltacht areas (1963) and Louis Marcus’s vivid panorama of Irish life Pobal (1969), seen through the lens of Bob Monks to the tune of Séan Ó Riada’s rousing  score.