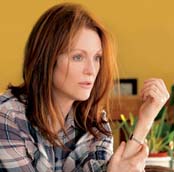 On Saturday, March 7th  following the 15.45 screening of Still Alice, the IFI and Alzheimer Society of Ireland will host a panel discussion to explore issues raised by the film, and broaden out to look at the value of film and the arts for both awareness-raising and therapeutic purposes for people living with Alzheimers and dementia.

Chaired by director and producer Anna Rodgers, the panel will feature Tina Leonard, Head of Advocacy at The Alzheimer Society of Ireland; Hilary Moss, Director of the National Centre for Arts and Health;  Helen Rochford Brennan from Sligo, Chair of  theIrish Dementia Working Group and vice-chairperson of the European Working Group of People with Dementia;  Ronan Smith, Advocate for the Irish Dementia Working Group; and Bairbre Ann Harkin, Education Curator at Butler Gallery Kilkenny. Butler Gallery is a founding member of the Azure Partnership, alongside Age & Opportunity, The Alzheimer Society of Ireland and the Irish Museum of Modern Art. Azure explores the potential for greater participation of people with dementia in cultural settings in Ireland.

About the film:
Alice Howard is a linguistics professor at Columbia University, a leading expert in her field. She lives in a plush Manhattan apartment with her surgeon husband John and has three adult children. She is happy, healthy and seems to have landed comfortably in mid-life, until she begins to forget things. Adapted from Lisa Genova’s 2007 bestselling novel, Richard Glatzer and Wash Westmoreland’s film is a deeply affecting drama that is centred on Julianne Moore, who is quite brilliant in the lead role.

Supported by a cast that includes Alec Baldwin, Kate Bosworth and Kristen Stewart, Moore cements her reputation as one of the finest film actors of her generation and is thoroughly deserving of the awards and acclaim her performance here has attracted.