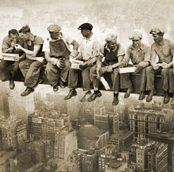 This March, to celebrate St. Patrick’s Day, the IFI highlights great Irish films with screenings of The Race, It Came from Connemara!! and Paddy. The IFI Irish Film Archive celebrates Seachtain na Gaeilge with free lunchtime screenings, including Amharc Éireann and Pobal and gears up for the repatriation of the important Irish language film Oidhche Sheanchais in July. In today’s blog from the IFI Irish Film Archive’s Tiernan MacBride library we look at other Irish language productions that promote our native tongue with style and imagination.

Poitín tells the story of Michil, a poteen-maker in Connemara who exacts revenge on his two agents when they double-cross him and threaten his daughter. It was the first Irish feature drama produced wholly in the Irish language and its entire cast and crew were Irish. [1] With this film director Bob Quinn wished to counteract the romanticised depiction of the West of Ireland made popular by The Quiet Man in 1952. [2] Cyril Cusack, Donal McCann and Niall Tóibín head a cast of local actors who depict a community crippled by desolation and hardship. The film deftly blends cruelty, compassion and dark humour to produce a powerful work that is regarded as one of Ireland’s finest indigenous features. Quinn decided to promote the Irish language with Poitín because he believed in the importance of the language as “the origin and spring of all our creative resources.” [3] Ros na Rún is a popular Irish language television soap which has been running on TG4 since 1996. The Connemara-based show is character rather than issue led, combining the dramatic plots used in conventional soaps with sharp comic dialogue and a dark gothic undertow. Adultery, suicide, murder and prostitution have all featured in its various storylines but it was Stephen Fry’s cameo appearance on the show that received the most media coverage. Fry’s offer to appear in a 2011 episode was hailed by Hugh Farley, a producer of Ros na Rún, as “a gift from heaven” [4] which raised the profile of the show and boosted audience ratings. [5] In this episode, Fry appears as a tourist who gets the better of two of the show’s characters when they attempt to take advantage of his lack of Irish. The light comic scene was viewed by one reviewer as a joke at the expense of those who “use their native tongue as a mercenary weapon rather than a communication tool.” [6] This short film focuses on Yu Ming, a young Chinese man who decides to travel to Ireland to escape his life of drudgery. He diligently studies Irish when his research shows him that it is the official language of the country, but is bewildered to find that nobody in Ireland can understand him. Luckily, he meets Irish speaker Paddy in a Dublin pub and with his help finds a new and happy home as a barman in the Gaeltacht. The film captures the isolation of the immigrant and washes of green, yellow and blue colours effectively represent Yu Ming’s changing states of mind. Writer and director Daniel O’Hara also uses humour to subtly examine the ambivalence of Irish people towards their native language. Shot with a budget of only €10,000 [7] it remains one of the most popular works to emerge from the TG4 and Filmbase Lasair scheme. The film won 18 awards at festivals worldwide including The Aspen Shortsfest and The Galway Film Fleadh. [8] Paisean Faisean was a popular dating show in which three men competed to woo a woman. They were given €400 to buy the lady in question a new outfit and the woman had to choose one of the outfits. The man who had the winning outfit then went on a date with her. Magma Films recorded the show with tongue firmly in cheek as it exposed the aesthetic ignorance of men who couldn’t differentiate between a skirt and a dress and one contestant who, “thought a ‘Bohemian’ look referred to a football team.” [9] The first three seasons of the show were presented by Aoife Ní Thuairisg and her arch asides to the camera added greatly to the show’s appeal.  Contestants mugged for the cameras, chatted to mannequins and snoozed on park benches to illustrate their shopping-induced exhaustion. Paisean Faisean received some of the highest ever viewership ratings on TG4 and was credited with “helping to put the fun back into the Irish language.” [10] The show added to its ‘cutting-edge’ [11] image when it broadcast its first episode featuring gay contestants in 2007 and when risqué ads for the show caused controversy in 2005 and again in 2007. [12] This documentary examines claims that Sonny Glynn and Matty O’Shaughnessy, Irish immigrants, are two of the men appearing in the famous photograph Lunch Atop a Skyscraper. The picture shows eleven men eating lunch on a beam suspended 850 feet above Manhattan during the construction of the Rockefeller building in 1932. It became an iconic image of the Great Depression, “symbolising hope and ambition while the world’s economy staggered.” [13] Filmmakers Seán and Éamonn Ó Cualáin spent five years researching the lives of the two men who left Galway for America after the Irish civil war of 1922.  Lón sa Spéir is narrated by Fionnula Flanagan in the Irish and English language versions and the documentary features interviews with family members, historians and journalists. It presents a convincing argument for the veracity of the claim and is a moving tribute to the generations who left Ireland to build America. Lón sa Spéir investigates whether the men on the far right and far left of Lunch Atop a Skyscraper
are Sonny Glynn and Matty O’Shaughnessy. Copyright Corbis Images 1932 and Sónta 2012.