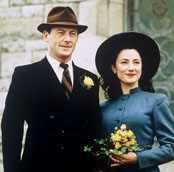 This February, the IFI offers audiences the opportunity to explore the vicissitudes of love with screenings of the award-winning Irish film Patrick’s Day,  Ira Sachs’s tender drama Love is Strange  and the classic Chinese film Spring in a Small Town.

In honour of St. Valentine’s Day, today’s blog from the IFI Irish Film Archive’s Tiernan MacBride Library looks at the depiction of love in five Irish productions, ranging from comic courtship techniques to scandalous stories of desire and betrayal.

Jack of All Maids is a short film about “the art of wooing with interruptions.” [1] This satirical piece was directed by Abbey stalwart Tomás MacAnna and features a cast of Abbey Theatre Players drawn together by producer Desmond Flynn. Jack McGowran features as a romantic philosopher in the film, adopting various roles to illustrate how to court a selection of widely differing females. He appears as a Frenchman, a shy Victorian, an intellectual and a Dub, while the unpredictable female objects of his ardour range from dancer to artist to weightlifter. Eamonn Andrews provides a breezily entertaining commentary on the portrayals of the problems of the reluctant and willing courting couples and it was hailed by The Irish Times as, “The first all-Irish comedy film.” [2] Jack McGowran woos a bevy of beautiful women in Jack of All Maids. Copyright DSF Productions 1952.

Based on real events, A Love Divided tells the dramatic story of the marriage between Seán Cloney, a Catholic, and his wife Sheila, a Protestant, in 1950s Ireland. In the film the two vow to commit to each other above all else, “it’s you and me against the world,” [3] but when Sheila refuses to send her children to the local Catholic school their love is put under an impossible pressure by external forces. Torn between his faith and his loyalty to his wife, Seán capitulates to the demands of the parish priest and Sheila, feeling betrayed, flees with her daughters to Scotland. They both become unwitting pawns in an ecclesiastical power struggle which results in bitter sectarian conflict within the local community. The film focuses on how Seán and Sheila’s love finally enables them to stand courageously together outside of their different religious and historical backgrounds. Goldfish Memory is “a polysexual comedy of manners” [4] focusing on a series of relationships which become intertwined in contemporary Dublin. The different characters explore their sexuality in their search for companionship and a Le Ronde-style plot imposes circular patterns and shared themes on the various storylines. One strand follows student Clara, who discovers that her lecturer boyfriend Tom is having an affair with another student, Isolde. Clara embarks on a relationship with Angie but eventually devastates Tom when she seduces Isolde. It is essentially an Irish romantic comedy that light-heartedly examines the comical nature of love in straight, gay and bi-sexual relationships. The film won over 15 awards at various International Film Festivals including the Monte Carlo Film Festival Jury Prize for Best Feature and the Copenhagen Gay & Lesbian Film Festival Best Actress Award for Flora Montgomery’s performance as Angie. [5] This documentary traces the incredible life of Lola Montez, born Eliza Gilbert in Co. Sligo in 1821. Over the course of her life she was a showgirl, courtesan, political adviser, gold prospector and author, changing careers, lovers and continents whenever expediency demanded it. She used her beauty and charm to beguile a succession of powerful men including the composer Franz Liszt and the author Alexandre Dumas. Her affair with King Ludwig I of Bavaria caused scandal and ultimately led to the king’s abdication of his throne in 1848. [6] Lola’s memoirs describe just one true love – newspaper editor Henri Dujarier who was killed in a drunken duel.  [7] The newspapers of the day avidly followed her movements which included adulterous affairs and shootings as well as arrests for bigamy, violence and indecency. She died in New York aged 39, leaving little behind her apart from the connotations still associated with the name Lola, “a byword for the exotic, the sensual, the wild and wonderful.” [8] Produced and directed by Anne Roper for RTÉ’s Hidden History documentary series Lola’s story is retold through a series of dramatised re-enactments and contributions from figures including novelist Anne Enright and biographer Bruce Seymour. Camille O’Sullivan as Lola Montez in Her Name was Lola. Copyright RTE 2005.

The Crush is a short film about an eight-year-old boy’s infatuation with his teacher. Ardal expresses his love to Miss Purdy and gives her a toy ring but is devastated when his gift is later replaced by a real engagement ring.  He challenges her undeserving fiancée Pierce to a duel and the plot takes a sinister turn as Ardal levels a gun at his rival. Miss Purdy breaks up with a snivelling Pierce when he admits he only proposed to mollify her and the gun is revealed to be a toy. The film ends sweetly and humorously with a pragmatic Ardal telling Miss Purdy that he’s decided against marrying her, “I’m not financially stable enough to care for all your needs.” [9] Writer and director Michael Creagh cast his son Oran as the main character and his son’s poised, dead-pan performance as Ardal helped to secure the film an Academy Award nomination for ‘Best Live Action Short film’ in 2011. Ardal (Oran Creagh) gets his rival in his sights in The Crush. Copyright Purdy Pictures 2011.