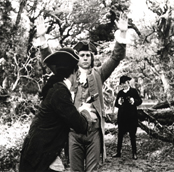 A lavish period drama based on William Thackeray’s novel of the rise and fall of a likeable 18th century Irish scoundrel, Barry Lyndon was Stanley Kubrick’s least commercially successful film. Yet, three decades after its release, Roger Ebert and Martin Scorsese proclaimed it a masterpiece. The IFI will celebrate the 40th anniversary of the film’s release with a From the Vaults screening of the film on Sat Feb 14th at 13.00. The screening will have a short introduction from Maria Pramaggiore, author of Making Time in Stanley Kubrick’s Barry Lyndon, who will also chair the Barry Lyndon Panel Discussion on Wednesday Feb 18th at 16.00.

In 1973-74, Kubrick spent nine months in Ireland shooting the film before making a hasty exit due to disruptions related to The Troubles, an ironic turn of events given the production’s theme of colonial conquest. The film is permeated by Kubrick’s trademark technical virtuosity with his mordant wit evident in the satirical depiction of the British aristocracy and in the audacious casting of Ryan O’Neal in the title role and supermodel Marisa Berenson as his long-suffering wife.

The Barry Lyndon Panel Discussion on Feb 18th at 16.00 also marks the occasion of the launch of Maria Pramaggiore’s Making Time in Stanley Kubrick’s Barry Lyndon. Exploring the transnational nature of Kubrick’s overlooked masterpiece, Pramaggiore will be joined by Chris Morris (Professor of Music, NUIM) who will analyse the musical score of the film and Richard Daniels (Senior Archivist, Stanley Kubrick Archive)  who will discuss what the Kubrick collection tells us about the shooting of the film.

Tickets for From the Vaults: Barry Lyndon (normal prices) and the Barry Lyndon Panel Discussion (€5 inc. tea/coffee) are available from the IFI Box Office at www.ifi.ie or 01 679 3477.