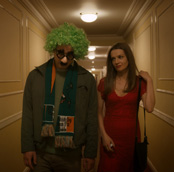 The esteemed psychiatrist Professor Ivor Browne will attend the opening night screening of PATRICK’S DAY at the Irish Film Institute on Friday 6th February where he will take part in a post-film Q&A with director Terry McMahon and cast, hosted by TV3’s Elaine Crowley.

The critically acclaimed film stars Moe Dunford, Kerry Fox, Catherine Walker and Philip Jackson.  Moe, who will be honoured at next month’s Berlin International Film Festival, plays a young man with mental health issues who becomes intimate with a flight attendant (Walker) with her own demons.  When his obsessive mother (Fox) finds out she enlists a dysfunctional detective (Jackson) to separate them.  PATRICK’S DAY is a provocative love story which explores the right to intimacy.

The former Chief Psychiatrist of the Eastern Health Board and Professor Emeritus of Psychiatry at University College Dublin, Professor Browne has had a distinguished career at the forefront of Irish psychiatry and has been unstinting in his support of PATRICK’S DAY, a film that he believes could have a lasting societal impact – “By any stretch of the imagination Terry McMahon’s Patrick’s Day is a powerful, brilliantly written and directed film. Moe Dunford is wonderful, as is Kerry Fox, and the other actors are also excellent but this is more than a creative work of cinema. It is not fiction. It is absolutely true to life. In my fifty years as a psychiatrist, and in the practice of psychotherapy, I have had to deal with family situations exactly like this. I feel it is vital that Patrick’s Day should be shown to as wide a public as possible. This film is an extremely valuable piece of work that will have a major impact on people’s understanding of the nature of psychotic breakdown and indeed of psychiatric illness generally.”

Ivor Browne was born in Dublin, and after his initial studies at the Royal College of Surgeons he worked in Oxford, London, Harvard and Dublin and went on to become Professor of Psychiatry at University College, Dublin and Chief Psychiatrist of the Eastern Health Board. His opposition to orthodox psychiatry made him a vital and controversial figure in Irish public life up until his retirement in the mid-90s. He was instrumental in bringing about a fundamental change in psychiatric practice in the this country which took the care of mental patients away from large institutions and brought it into the community. His books include Ivor Browne: Music and Madness (2009) and The Writings of Ivor Brown: Steps Along the Road, the Evolution of a Slow Learner (2013) both published by Cork University Press.

TV3’s Elaine Crowley will host the Q&A on the night.  Elaine is an Irish journalist, presenter and newsreader, best known for presenting TV3’s Midday who has been very open about her own experiences with mental health having suffered from depression in the past.

PATRICK’S DAY will be released in cinemas around the country from the 6th of February.  Tickets for the opening night screening at the IFI at www.ifi.ie or 01 679 3477