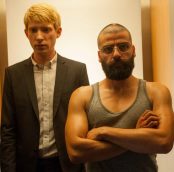 Filmmakers and actors, including Domhnall Gleeson, to attend previews & public interviews at the IFI

The beginning of a year brings many great film releases, and this month will be a busy one with filmmakers and actors visiting the IFI and attending preview screenings and public interviews. Make sure to book early as some events are selling fast! IFI & First Fortnight: Heaven Adores You + Q&A (Saturday, January 10th, 16.00): In Heaven Adores You we journey through the life of Elliott Smith, a musician whose rise to prominence in the 1990s and early 2000s was cut short by his untimely death at the age of 34 in 2003. Tickets for this event can be booked at www.firstfortnight.ie Opening Night: Apples of the Golan + Q&A (Friday, January 16th, 18.30): This documentary tells the epic story of Majdal Shams, one of five remaining Arab villages in the Israeli-occupied Golan Heights. Before the occupation there were 136 such villages, which have now mostly been destroyed. Cut off from their homeland since the events of the Six Day War, the villagers fight to maintain their national identity amid political uncertainty, border disputes and the Syrian civil war. Opening night screening (at 18.30 on Friday January 16th) will be followed by Q&A with directors Jill Beardsworth and Keith Walsh hosted by Shona Murray of Newstalk 106-108FM. BOOK NOW

Ireland on Sunday: Dreams of a Clown + Q&A (Sunday, January 18th, 13.00): Galway-based director Dieter Auner turns his attention from central Europe (Leaving Transylvania, Off the Beaten Track) to Ireland following the fortunes of the Gerbola family as they fight to keep their small family circus on the road. For nine months of the year the tightly knit crew exist outside the bounds of “normal” life with Mikey Gerbola – eccentric clown, generous husband, and determined small-business man – battling at the helm. Director Dieter Auner will participate in a post-screening Q&A. BOOK NOW