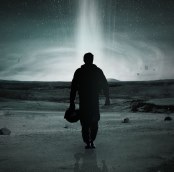 Interstellar 70mm coming to the IFI

Christopher Nolan’s laudable and well-known commitment to celluloid ensured that his latest opus was released on a wide range of formats, both analogue and digital and now Dublin film fans will have the chance to Interstellar on glorious 70mm at the IFI, the only cinema in Ireland capable of projecting this super high-quality sound and vision format.

In the near future, when environmental catastrophe has all but destroyed crop production, Cooper (Matthew McConaughey, turning in another in a line of recent strong performances) is enlisted to explore potentially inhabitable words which might prove mankind’s salvation. Accompanying him on his mission is Amelia (Anne Hathaway), daughter of his former mentor, John Brand (Michael Caine).

An undeniably grand spectacle which is all the more impressive in this larger, high-resolution format, at its core it is more simply the story of the love between Cooper and his daughter, Murph (played at various ages by the impressive Mackenzie Foy, Jessica Chastain, and Ellen Burstyn).