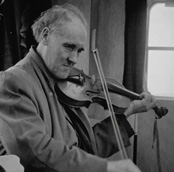 A FEAST OF MUSIC FILMS AT THE IFI FOR TRADFEST WITH FOLK LEGEND PETE SEEGER, DONEGAL TRAD FIDDLER JOHN DOHERTY AND ‘90s BAND THE LEVELLERS

For Immediate Release:
A FEAST OF MUSIC FILMS AT THE IFI FOR TRADFEST WITH FOLK LEGEND PETE SEEGER, DONEGAL TRAD FIDDLER JOHN DOHERTY AND ‘90s BAND THE LEVELLERS

A Curious Life, here receiving its Irish premiere with the director Dunstan Bruce in attendance, is a new documentary chronicling the rise and fall of anarcho-punk-folk band The Levellers. A product of Thatcher’s Britain, the band rose to fame in the early ‘90s before disappearing into a chaotic mire of drinks, drugs and creative drought. A Curious Life is a poignant and hilarious film as told by their eccentric bassist Jeremy Cunningham.

The Long Road to Glenties follows Pete Seeger (1919-2014) and his wife Toshi on their trip to Donegal in 1964 to track down the elusive Donegal fiddler John Doherty (1900-1980). Doherty was passing his time as a tinsmith travelling from house to house and playing a form of traditional music of which he was one of the last custodians. For the past 50 years Toshi’s extraordinary film of their meeting has been preserved in Washington’s Library of Congress. It is now revealed to a cinema audience for the first time. The introduction to the film by Dr. Conor Caldwell (QUB) and Danny Diamond (Irish Traditional Music Archive), both fiddlers, will incorporate short musical performances.