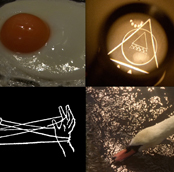 For the past 38 years Henry Hills has been making 16mm experimental films. He received an MFA in Filmmaking at the San Francisco Art Institute where his teachers were James Broughton, George Kuchar and Hollis Frampton. Other influences are West Coast filmmakers, Bruce Conner and Harry Smith.

On moving to New York in 1978, Hills began an association with the ‘language’ poets and the Downtown improvised music scene which led to fruitful collaborations with musician John Zorn and other artists, filmmakers and dancers, such as Christian Marcley, Sally Silvers and Abigail Child.

His earliest films (Porter Springs 3 1977) are silent single-frame landscape studies. His use of cut up sound in Kino Da (1980), his first sound film, is influenced by the Russian poet Klebnikov, who was part of the Russian Futurist movement. He continues this investigation into sound and image in his later New York work. Money (1985) is probably one of the densest sound films ever made with 2500 ‘scenes’ in 15 minutes. Arcana (2010) is based on a film treatment by long collaborator and musician John Zorn. The film plays on the themes of alchemy and esoteric knowledge and the image flow contains numerous recurring motifs – such as acts of cutting, water, and the atmospheric images of tiles, fences, steps, as well as countless diagrams – from such different sources as B-movies, newsreels, or historical avant-garde films, all of which dovetail together with video or 16mm footage of everyday miniatures.

This special event is a rare chance to see some of Henry Hills’ key works screened on 16mm and to meet the filmmaker in person.