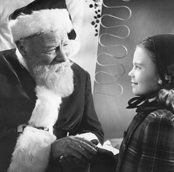 It’s tinsel-time in Tinseltown! The Christmas decorations are going up in the IFI Foyer and the wine is busy mulling in the IFI Café Bar. But however many presents are under the tree, a Christmas without film is like a sleigh with no reindeer, so this December the IFI cinemas are packed full of festive film favourites for all tastes and ages and not a turkey in sight!

This year’s selection of IFI Festive Favourites includes the 1947 original and unassailable Miracle on 34th Street (20th Dec  1pm & 23rd Dec 4pm) that sees Kris Kringle’s claim to be the real Santa Claus and not just the Macy’s Thanksgiving Parade Santa brought to court; The Shop Around the Corner (21st Dec 4pm & 23rd Dec 18.15), the 1940 festive penpal story with James Stewart that inspired Nora Ephron’s You’ve Got Mail; Éric Rohmer’s rigorous 1969 examination of fidelity and freedom, My Night With Maud (14th Dec 4pm); and Billy Wilder’s wonderfully humane The Apartment (20th Dec 4pm & 23rd Dec  6.15pm) which with its moments of melancholia and intensity that it seems inadequate to merely describe it as a comedy.

Did someone mention James Stewart? At Christmas? Without mentioning Bedford Falls? Fear not! It’s a Wonderful Life will be back on release at the IFI from December 12th so there’ll be a chance to stock up on a dose of Frank Cappa’s 1946 tale of altruism,  banking ethics and angels. A critical and commercial disappointment on its initial release, its reputation has blossomed to the point that it is now required Christmas viewing.

Younger viewers and the young at heart will also enjoy the specially selected  IFI Family Christmas films. Suzie Templeton’s Peter and the Wolf  + Shorts Selection (Age 6+, Dec 7th 11am) gets the festive season off to a howling start. This stunning animated version of Sergei Profokiev’s classic work has become a festive favourite since it won an Academy Award in in 2008 and is followed with a selection of family shorts. There’s a chance to get acquainted with a talking moose which has just crashed through the roof in A Christmoose Story (Age 8+, Dec 14th 11am) and don’t miss out on one of the finest and most faithful adaptations of Charles Dickens ever committed to film…The Muppet Christmas Carol (Cert:G, Dec 21st 11am).

The Christmas season can stretch all pockets (especially those with the biggest hearts) so the IFI Café Bar is bringing back their popular SUNDAY BRUNCH + MEAL DEAL. From 12pm to 4pm, every Sunday this December, we are offering our popular Brunch and movie deal in the IFI for just €16. You can book a table for before or after a film by calling 01 679 8712 or simply ask at the bar. (The deal excludes any other special offers, see www.ifi.ie for details.)

From the best in Irish film and T.V. to the top DVDs of 2014, from documentaries to dramas, from serials to sci-fi theres hundreds of gift ideas for film lovers at the IFI Film Shop which has extended opening hours right up to Christmas Eve!

Tickets for all the IFI Festive Favourites and the IFI Family Christmas are available now at the IFI Box Office on 01 679 3477 or online at www.ifi.ie.