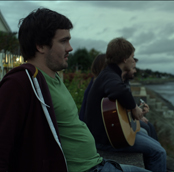 Q&A with OUT OF HERE director Donal Foreman Tell us about the film Out of Here which you have directed?

Out of Here follows Ciaran, a Dubliner in his early 20s, reluctantly returning to his hometown after a year of travelling. He struggles to reconnect to the place, leading us along the way through the varied social, urban and natural spaces of the city, and giving an insight into what Dublin has to offer today for Irish youth.

I conceived the project about seven years ago, when I was still in college at the National Film School in Dun Laoghaire. I wrote a version of it at that stage, then left it for a few years while I honed my skills on a series of short films. In 2010, I returned to it, started revising it and seeking a producer. I pitched it to various Irish companies without much success. In March 2012, Emmet Fleming came on board as producer and by September we had raised the budget, found our cast and crew and were ready to begin production. How did you raise the budget?

The production budget was crowdfunded through our own website, www.outofherefilm.com. We invited donations of any amount, as with the Kickstarter or Fundit model, but we also gave the option to invest in the film by buying a €150. The Irish Film Board got involved during post-production and provided us with completion funding.

Who do you think will enjoy the movie you have directed?

I don’t believe in targeting a particular demographic or keeping a specific audience in mind while working on a film, but I hope the film can be appreciated by a wide range of people who have an open mind about what a film can be or should do. To be a little less evasive… so far it’s definitely been clear that the film resonates strongly with young Irish people, many of whom should be able to recognize something of their own lives in the film. And Dubliners and Dublin-lovers of all stripes should enjoy seeing the city represented in ways it hasn’t been before on film. What’s the next step for the film?

The film will have its European premiere at the Mannheim-Heidelberg International Film Festival on November 13th, which we’re excited about as it’s a festival known for showcasing the debut films of “auteur” directors (including Truffaut, Fassbinder, Kieslowski and Jarmusch). After that, who knows. You can follow me on Twitter at @donalforeman and I’ll keep you posted.

What really excites, inspires or motivates you about film?

Finding forms to see and think about the world in a different way, and getting to play and create with lovely people along the way.

What other films have you seen recently that you enjoyed?

I’ve been living in New York City since 2011, and I go to a lot of movies here, but mostly old ones because there is such a great repertory scene. Recently I saw and loved Frank Capra’s lesser known classic, American Madness, at Film Forum. In terms of contemporary cinema, I thought Abel Ferrara’s Welcome to New York and Claire Denis’ Bastards were both excellent. Oh, and one recent Irish discovery: I finally saw Pat Murphy’s groundbreaking Maeve a few months ago and I think its criminal that that movie is not more widely available and known. Out of Here directed by Donal Foreman opens on November 7th at the IFI. There will be a post-screening Q&A with director Donal Foreman and cast members Fionn Walton (Ciaran) , Annabell Rickerby (Jess) and Aoife Duffin (Melissa) following the 18.15 screening on Friday, November 7th. BOOK NOW.

DIRECTOR IN FOCUS: Donal Foreman will be in conversation with the IFI’s Michael Ryan on November 10th at 18.30, when a selection of his short films will be presented in advance of his debut feature, Out of Here.