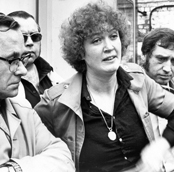 President of Ireland, Michael D. Higgins to attend film celebrating the life of Inez McCormack at the IFI

Celebrating the life of passionate and effective advocate of social justice Inez McCormack, the IFI will present the new documentary Inez: A Challenging Woman on Thursday 27th November at 16.00. The film will be screened in the presence of the President of Ireland Michael D. Higgins and will be followed by a panel discussion with Martin O’Brien, the Senior Vice President for Programmes at Atlantic Philanthropies; Michael Farrell, civil rights activist; Trevor Birney, co-director; and Susan McKay, producer and narrator.

A renowned Northern Irish trade union leader and human rights campaigner,Inez McCormack died in January 2013. This documentary is based on an interview she gave to her friend, writer Susan McKay, in October 2012 shortly after Inez learned that she had inoperable cancer and probably had just weeks to live. It also includes interviews with friends and colleagues of Inez, including former US secretary of state Hillary Clinton, President Michael D. Higgins; former President Mary Robinson; former president of the ICTU, Patricia McKeown; and leading human rights lawyer Michael Farrell. Inez’s husband, Vincent McCormack is also interviewed.

The film, which is directed by Trevor Birney and Eimhear O’Neill and won Best Short Documentary at the Galway Film Fleadh 2014, includes a wealth of fascinating archive material covering Inez’s long career which began when she became a civil rights activist in 1968. As Mary Robinson comments in the film, “For women, she was a towering figure.” Rosaleen Davidson, one of the women whose career as a trade unionist Inez encouraged, says of her, “She gave a voice to working class women like me.”