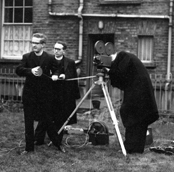 Radharc was a religious affairs programme broadcast on RTÉ, Ireland’s national public service broadcaster, from 1962 to 1996. Over 400 documentary programmes were produced by the Radharc Team on issues of faith and social justice around the world. The Radharc Archive contains thousands of film and tape assets, as well as a wonderful collection of production documents and photographs that are preserved in the vaults of the IFI Irish Film Archive and RTÉ.

Fifty years after the first broadcasts, with the vital assistance of the Broadcasting Authority of Ireland’s Archive scheme, the first 15 programmes are being digitally preserved and restored. With the cooperation of RTÉ, the Radharc Trust is working in collaboration with the IFI Irish Film Archive where the original film elements for these early programmes are held and whose archivists have been working on their technical assessment and preparation for digitisation. Dublin facility house Screen Scene is managing the migration of the 16mm to HD digital formats which will then be preserved at the IFI within their digital repository.

THE RADHARC ARCHIVE PROJECT from Esras Films on Vimeo.

Video made by Peter Kelly and Esras on behalf of the Radharc Trust.