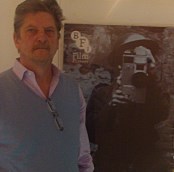 “Unless the world learns the lessons these pictures teach, night will fall.”

As part of the IFI Stranger Than Fiction Documentary Film Festival, we were honoured to host an Irish premiere of Night Will Fall, a powerful new documentary about the liberation of the Nazi concentration camps and the efforts made by combat and newsreel cameramen to document the almost unbelievable scenes encountered there. Director André Singer (executive producer of the multi-award-winning The Act of Killing) was at the IFI on September 27th and took part in a post-screening interview.

Night Will Fall is currently on general release and now showing at the IFI. LEARN MORE

Listen back to a post-screening Q&A with director Andre Singer being interview by IFI Head of Programming Michael Hayden:

STF: Night Will Fall: Interview with director Andre Singer at the IFI, September 27th, 2014 by Irishfilminstitute on Mixcloud

Listen back to other Festival panel discussions and post-screening interviews on the Festival Page.