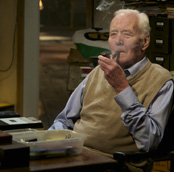 Key figures in Irish politics to introduce Tony Benn: Will and Testament

Special screenings of Tony Benn: Will and Testament with introductions by friends and admirers of Benn’s from Irish political life will take place from Friday October 3rd until Thursday October 9th. The line up will include the following: Richard Boyd Barrett TD, David Landy (Assistant Professor, Dept of Sociology, Trinity College, from Ireland Palestine Solidarity Campaign), Joe Higgins TD and Clare Daly TD.

Tony Benn was elected a British Member of Parliament in 1950. During a long and influential career that witnessed great social upheaval, he had to fight for his right to abandon an inherited peerage in 1960, his committed socialist beliefs brought him into conflict with many, and he was a thorn in the side of both Margaret Thatcher and Tony Blair.

His fraught relationship with the media saw him once decried as ‘The Most Dangerous Man in Britain’, then celebrated as a ‘national treasure’, and the irony wasn’t lost on Benn, who remained involved in political campaigns up until his death last March, aged 88. Skip Kite’s documentary takes the form of an extended interview with Benn, illustrated with great archive footage and it’s an intimate reflection on the life, work and passions of an inspiring and brilliant figure. There’s great sadness in politicians like him having become increasingly rare.

Dates and times of special guests attending the screenings:

Visit the film page to watch the TRAILER.

Tickets for these screenings can be booked online or by calling the IFI Box Office on 01 6793477.