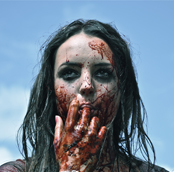 THE SPIRIT OF IFI HORRORTHON REAWAKENS FROM ITS NIGHTMARISH SLUMBER: 5 DAYS OF THE BEST AND VERY WORST OF SCARY CINEMA FROM 23TH-27TH OCTOBER 2014!

It’s back! IFI Horrorthon 2014 promises to be one of the terrifying vintages in its 17-year brain-splattered, intestine-tangling history. For 5 hair-raising days in the run up to Halloween there’ll be nowhere to hide from Guests of Honour, master of the exploitation flick, Frank Henenlotter and rising star of the ‘scream queens’, Jessica Cameron. The vast legacy horror icon Vincent Price will be explored in a new strand called IFI Horrorthon Honours and the IFI’s festival of fear will be delving even further back into the vaults of the occult with a live-accompanied screening of 1922 silent film Haxan: Witchcraft Through the Ages. A total of 38 features, many of them Irish premieres, make IFI Horrorthon by far the biggest and best gathering of horror film devotees in Ireland.

Frank Henenlotter is one of the masters of the exploitation serio-comic horror and a worthy Guest of Honour at this year’s IFI Horrorthon. He’ll be taking part in Q+As after his new documentary That’s Sexploitation as well as looking back at his gory comedy horror debut Basket Case (1982), scientist Jeffrey’s ill-fated attempt to put his fiancée back together using parts of New York prostitutes in Frankenhooker (1990) and the skull-slurping extravaganza Brain Damage (1988).

To be a scream queen you need a touch of glamour, a real affinity with genre characters and a blood-curdling screech; Jessica Cameron, the second Guest of Honour at IFI Horrorthon has all of the above in spades. She’ll be presenting and taking part in Q&As after her directorial debut Truth or Dare, where an angry fan of a faked online show takes its stars hostage and forces them to play the game for real, and her acting appearance in the great haunted house short film The Tour.

Vincent Price (1911-1993) had over 200 credits to his name and a career that spanned over 50 years. The inestimable Price was known for his gothic looks and menacing voice, and his massive contribution to the genre is undeniable. The inaugural edition of the new strand IFI Horrorthon Honours samples Price’s genius with screenings of The Abominable Dr. Phibes (1971), Theatre of Blood (1973) on 35mm and House of Usher (1960).

IFI Horrorthon opens with upcoming release The Babadook. Amelia struggles to shake off her six-year-old son’s unshakeable belief in monsters, until it suddenly seems that not every monster is imaginary…This Australian contribution kicks of an Antipodean trend in this year’s selection with Aussie ice-cream screamfest Chocolate Strawberry Vanilla, smart Aussie house-arrest mystery Housebound (with its predictably named heroine Kylie), and New Zealand’s vampire mockumentary What We Do In the Shadows made by the team that gave us Flight of the Conchords, all suggesting that Down Under is going through something of horror resurgence.

Other highlights of this year’s harvest of new horror include The Editor, a typically wild send-up from the Manborg production outfit Astron 6; Monsters: Dark Continent, Gareth Edwards’ follow-up to 2011 IFI Horrorthon hit Monsters; The Samurai, a rare example of a horror with a queer sensibility that isn’t all in the subtext; the entertaining documentary tale of egos run amok in Lost Soul: The Doomed Journey of Dr. Moreau; and Starry Eyes which follows an aspiring actress in an occult tale of ambition, possession and the true price of fame.

As always there’s a dash of homegrown fear-juice in the IFI Horrorthon cauldron. This year’s Irish contributions include veteran Irish horror director Jason Figgis’ The Ecstasy of Isabel Mann and newcomers Amy Carroll, Conor Dowling and Eoin O’Neill’s The Light of Day.

While it’s not abandoning its home planet, this year IFI Horrorthon is keen to pull science fiction fans into its orbit, presenting three sci-fi horrors; Debug , directed by actor David Hewlett (Cubed) pits space hackers against onboard AI that would do anything to become human; Ejecta sees alien chaser Joe caught up in a terrifying invasion; and Coherence sees a dinner party go off kilter as a passing comet causes a convergence of parallel realities.

The Dublin Film Ensemble will be bringing new energy to the IFI Horrorthon classics selection with their live accompaniment to Haxan: Witchcraft Through the Ages (1922), a fascinating and unsettling silent recounting of the history of witchcraft. Another classic not to miss is Jaques Tourneurs’ Night of the Demon (1957) which sees a once sceptical doctor trying to escape the curse placed on him by a malevolent satanic cult.

There’s another new dark force in the shape of a selection of FREE Literary Readings in the IFI Tiernan MacBride Library in association with the Bram Stoker Festival, this year’s selection will focus on J. Sheridan Le Fanu’s Camilla and Bram Stoker’s Dracula.

Individual tickets for the IFI Horrorthon films are on sale now  at the IFI Box Office in person, on the phone on 01 679 3477 or online at www.ifi.ie. Those who find themselves sucked deeper into the complex web of terror can get a range of passes ranging from one to five days.

The directors will attend the screening.

23.10 DOUBLE BILL: DEADLY VIRTUES & THE HOUSE AT THE END OF TIME

Introduced by director Jessica Cameron, followed by a Q&A.

23.00 HAXAN: WITCHCRAFT THROUGH THE AGES

With live musical accompaniment by the Dublin Film Ensemble.

With short film, The Tour, and introduced by Jessica Cameron.

Individual tickets available now for the IFI Horrorthon on 01 679 3477 or online at www.ifi.ie .

For more information, high-res images and interview requests with guests and the Horrorthon team contact Patrick Stewart at the IFI Press Office on pstewart@irishfilm.ie or call 01 679 5744