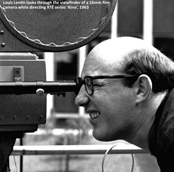 The Board and staff of the IFI regret the passing of Louis Lentin, acclaimed director of theatre, film and television.

Louis’ television career began in RTÉ in 1961 with his most memorable early work, the highly original Insurrection (1966) series, which presented the events of Easter 1916 in a news-style format. His television work continued further afield for a period when he was instrumental in establishing Israeli Television in the late 1960s.

Upon his return to Ireland he rejoined RTÉ’ and was appointed Head of Drama in 1978. Through his own company, Crescendo Productions which he established in 1990, Louis began to concentrate on documentary production and produced work which explored inequities in Irish society – from No More Blooms exploring the experience of Jewish refugees in Ireland in the 1930s to the ground-breaking Dear Daughter (1996) and Stolen Lives (1999) which uncovered the systematic abuse of children in Ireland’s orphanages and industrial schools.

It was our pleasure to engage with Louis on many occasions in recent years. Whether researching archival material, seeking preservation advice or agreeing to our programming requests, his approach was always meticulous, efficient and gracious. He leaves a body of work distinguished by integrity and by a passionate commitment to giving voice to the voiceless; work that has been crucial in the development of a national awareness of past injustices.

Our sympathies are extended to his wife, Ronit and to his children, Alana and Miki.