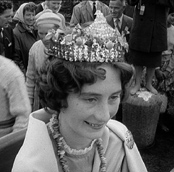 IFI National returns to the Fleadh on Wed 9thJuly at 1pm in Town Hall Theatre with a programme of films from the IFI Irish Film Archive which is sure to appeal to Galway audiences. This is the inaugural programme of the Local Films for Local People Project which sees collections of local-interest films being brought back to the communities in which they were made.

The Local Film for Local People Project will target 4 key cultural venues annually and will appear later in autumn and winter 2014 at: the Carnegie Arts Centre, Kenmare; Tech Amergin, Waterville and Source Arts Centre, Thurles. The presentations will be introduced by IFI staff with contributions from local historians. More venues will be identified in 2015.

Sunniva O’Flynn, IFI Head of Irish Film Programming, said ‘this initiative will create exciting programming possibilities for regional exhibitors and will create new routes through the IFI Irish Film Archive’s vast store of moving image collections. We look forward to working with local audiences and enhancing our understanding of these invaluable materials.’

The Fleadh programme, taking place on Wed 9th July at 1pm features a selection of films made in and about Galway between the 1920s and 70s. There will be musical accompaniment for a selection of the older silent films. Many of these films, documenting life, leisure and livelihoods have not been seen on screen since the time of their original release and will appeal to all interested in the culture and history of Galway.

The programme includes Come Back to Ireland, a US travelogue from 1936 featuring rare footage of the long-gone thatched cottages of the Claddagh Village; Colourful Connemara, a warmly nostalgic Irish Tourist Association film from 1943; An Irish Touchstone about the opening of the Tynagh mines in 1967; The Master (1974), Radharc’s documentary about the teacher and pupils of Cloghan Hill School near Tuam; and a selection of newsreels from the 1920s to the 1960s.