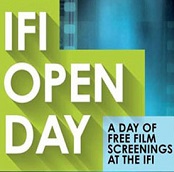 Wouldn’t it be great if the home of film in Ireland opened its doors for a whole day and invited the public into a full day of specially selected films that are all completely FREE? Believe it or not, that’s what’s happening at IFI on 14th June for the famous and fantastic IFI OPEN DAY 2014.

Tickets are distributed on a first-come-first-serve-basis from 11am and the early bird catches the worm! It’s also a great day to sign up for IFI Membership as there is a special €5 discount on all standard and concession IFI Memberships, or if you want to take your support to the next level there’s a €10 discount on Best Membership.

The film choices for IFI Open Day 2014 include special sneak previews of three upcoming new releases; Believe which tells the fictional story of legendary Man U football manager Sir Matt Busby helping a wayward boy achieve his dreams of football greatness; the extraordinary new 12 year film project Boyhood from Richard Linklater (Before Sunrise, Dazed and Confused) that captures a young actor Ellar Coltrane from ages 6 to 18; and Lilting, a beautiful cross-cultural story of friendship and acceptance in the wake of grief starring Ben Wishaw.

Well-known favourites returning to the big screen include Hal Ashby’s dark comedy Harold and Maude; Federico Fellini’s 8 ½, one of the greatest films to be made about filmmaking (or just one of the best films full stop); and Woody Allen’s The Purple Rose of Cairo. There are certainly familiar faces (Brad Pitt and Casey Affleck) in The Assassination of Jesse James by the Coward Robert Ford but Mark Kermode thinks this 2007 offering is ‘one of the most wrongly neglected masterpieces of its era’ and he’s right!

IFI Open Day always introduces some classics that are less familiar but no less worthy of another outing on the big screen. This year there’s Classe Tous Risques, with Jean-Paul Belmondo which has been described by Tavernier as ‘one of the best French gangster films’, a sumptuous 1929 British melodrama Piccadilly, and sci-fi classic Earth vs. the Flying Saucers which features the stop-motion effects of the late, legendary Ray Harryhausen. There’s also a rare chance to see fantastic wry Irish comedy by Trish McAdam’s Snakes and Ladders which is preserved in the IFI Irish Film Archive.

Don’t forget to vote for your favourite film – or the film you missed – from the last year in the IFI and see it back on the big screen for the IFI Audience Choice slot. To see the shortlist and cast your vote visit our Poll Page before 9th June when the poll closes.

We will be posting updates on Facebook and live-tweeting throughout the day via #IFIOpenDay at @IFI_Dub so join the conversation, share your recommendations, photos and reviews!

WHY IS EVERY THING BEING GIVEN AWAY FOR FREE? Simple, once every year the IFI likes to show itself off to the city – both to old friends and new faces alike. Aiming to EXHIBIT, PRESERVE and EDUCATE, the IFI has a busy year-round programme in its three cinema screens, including new releases, classics, seasons and festivals; the IFI Irish Film Archive preserves and provides access to Ireland’s moving image heritage and IFI Education gives access to film and fosters creative thinking in children and young people nationwide. IFI National and IFI International create and support film events across Ireland and the world.

Tickets for all films will be distributed IN PERSON ONLY at 11am on June 14th at the IFI. Tickets will not be available online or by phone. There is a maximum of four tickets per-person queuing, strictly allocated on a first-come-first-served basis.

The Assassination of Jesse James by the Coward Robert Ford 16.50