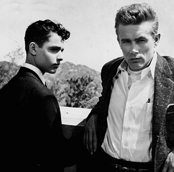 The films of James Dean at the IFI

A major talent whose career was tragically cut short; the IFI presents all three of James Dean’s major films

Though he was just 24 years old when his career was cut short in a car crash, James Dean’s three revelatory lead performances sent shockwaves through Hollywood. A keen student of Lee Strasberg and early convert to the school of method acting, Dean lived his roles in a way that few had before him. That shock of the new combined with films that exploited his youthful beauty and his innate ability to dramatise universal questions young people continue to be confronted with today, are all possible reasons why his iconography has endured.

From the 25thApril – 1st May the IFI will be presenting new digital restorations of all three of Dean’s major films Rebel Without a Cause, East of Eden, and Giant and a FREE Afternoon Talk examining his evolution as an icon from UCD Film Studies researcher Anthony McIntyre (30th April, 16.15).

Rebel Without a Cause (April 25th & 30th, 18.15) shows Dean take the role of Jim Stark, a jittery kid who wants to stay in with local toughs and ends up in a delinquent family unit with Judy (Natalie Wood) and Plato (Sal Mineo). All three deliver incredibly intense performances, while Dean, in his red Harrington jacket, white t-shirt and Levis, would cement an image of cool that would be Xeroxed by following generations.

The only one of his films that Dean saw in its entirety before his death, Elia Kazan’s lavish adaptation of John Steinbeck’s novel East of Eden (April 26th16.00 and April 29th 18.15) earned him an Academy Award nomination. Dean plays Cal, who along with his competitive brother, vies for the affection of his devout father in a familial conflict that foreshadows the impending entry of the U.S into WWI.

Geroge Steven’s adaptation of Edna Ferber’s novel Giant (April 27th 16.00 and May 1st18.30) is unapologetically epic, ambitious and provocative. Dean’s performance as Jett Rink, a Texas cowboy who strikes oil and then sets out to extract a bitter revenge on love-rival Bick Benedict (Rock Hudson), is strikingly naturalistic and this final film would earn him another, this time posthumous, Oscar nomination.

Tickets are available now from the IFI Box Office, 01 679 5744 online at www.ifi.ie/jamesdean. The Afternoon Talk are FREE but to secure your seat please call or drop into the IFI Box Office to collect a free ticket.

For images and more information please contact Patrick Stewart at the IFI Press Office on 01 679 5744 or email pstewart@irishfilm.ie.