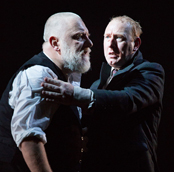 ‘Simon Russell Beale is magnetic. An exceptional production.’ The Guardian

‘The cast is beyond superlative. A literally awe-inspiring production.’ Time Out

Sam Mendes directs Simon Russell Beale in King Lear, as NT Live returns to the IFI on 1st May

Filmed in front of a live audience in London and live-streamed to cinemas worldwide via satellite, NT Live returns to the IFI in association with Dublin Theatre Festival this May with a critically acclaimed production of William Shakespeare’s King Lear on Thurs 1st May at 18.45.

At the play’s outset, an aged and vainglorious king decides to divide his kingdom between his three daughters, according to which of them is most eloquent in praising him. When his favourite, Cordelia refuses to participate and says nothing, Lear’s seemingly settled world quickly descends into chaos.

For more media information and images please contact Patrick Stewart at the IFI Press Office on 01 679 5744 or email pstewart@irishfilm.ie

The 2014 Dublin Theatre Festival programme will be announced in July with tickets on sale from August. For details visit www.dublintheatrefestival.com.

Dublin Theatre Festival is proudly supported by its presenting partner, Dublin Airport Authority and by principal sponsors including The Irish Times.

The IFI and Dublin Theatre Festival acknowledge the financial support of the Arts Council.