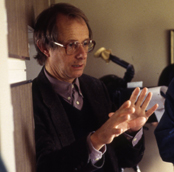 Ken Loach to visit IFI for retrospective of his work

There are few film directors who have tackled social injustice as consistently and courageously as Ken Loach and if the reports turn out to be true that his upcoming feature Jimmy’s Hall, released on 30th May, is to be his last, it will leave a void in English-language cinema that will be difficult to fill. Loach will be visiting the IFI to do an in-depth public interview on 8th May with RTÉ Seán Rocks as part of a wide-ranging IFI season of his work that will run throughout May and June. The schedule for Part 1 in May has just been announced and tickets are on sale now.

Loach’s lifelong commitment to challenging the political status quo has been characteristic of his films since he was directing television plays for the BBC in the mid-1960s. Controversy has also been a constant theme, yet the debate and fury he has provoked could never overshadow what a great filmmaker he is, and his pioneering work in television, documentary and fiction films has had a global influence.

Loach’s work has often had an Irish dimension whether examining the Northern Irish Troubles, either head on in Hidden Agenda (21st May, 18.15) or from a British recruit’s perspective in Looks and Smiles (18th May, 16.00); looking at Irish communities in Britain through characters such as desperate unemployed Manchester –Irish Catholic family-man Bob in Raining Stones (25th May, 16.00), or Loach’s award-winning period exploration of the Irish War of Independence and Civil War The Wind that Shakes the Barley (screening in June). The latter bodes well for his upcoming Irish period drama Jimmy’s Hall (Opens 30th May) which deals with the story of 1930s political activist Jimmy Gralton, and will premiere at this year’s Cannes Film Festival before its release at the IFI.

Other highlights of the May selection include a free screening of Cathy Come Home, Loach’s daring 1969 exploration of homelessness that proved to be a defining moment in British television and ignited a big debate in British society that helped launch two homelessness charities Crisis and Shelter; the previously suppressed and very rarely seen The Save the Children Fund Film that explored the politics of poverty, class and charities somewhat too controversially (at the time) for the charity that commissioned it; and Kes (5th May, 18.15), one of Loach’s best known works and one of cinema’s greatest and most enduring depictions of childhood.

But beyond the better-known and most controversial films, there’s a whole repertoire of fierce and fantastic films in the retrospective and a deeper foray into Loach territory which will be sure to reward just as much as it puts fire in your belly.

Tickets are available for Part 1 of the Ken Loach Season now from the IFI Box Office on 01 679 3477 or online at www.ifi.ie/kenloach.

For more media information and images please contact Patrick Stewart at the IFI Press Office on 01 679 5744 or email pstewart@irishfilm.ie