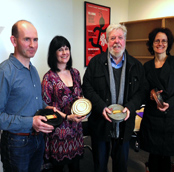 The IFI Irish Film Archive, aided by its close partnership with NUI Maynooth, has received an important deposit of film documenting Ireland from the 1930s through to the 1950s. The collection was filmed by Fr. Edward Moriarty who left Dingle for America in 1908. Fr. Moriarty filmed visits home to Ireland throughout the 1930s-1950s, and the deposited collection is mainly from the 1930s, featuring valuable footage of the Eucharistic Congress, Glasnevin Cemetery and Slane Castle. Fr. Moriarty went on to become a monsignor in Pittsburgh and remained there until his death in 1961.

The collection was carefully kept by Marie Kelly,  former College Resident’s Officer at NUI Maynooth  and a niece of Fr. Moriarty, until she sadly passed away in 2013. Terry Nealon (pictured 2nd to the right) deposited the films on Marie’s behalf. The collection is now with the IFI Irish Film Archive where it will be technically inspected, catalogued, digitised and the originals preserved in our climate controlled vaults in Temple Bar.