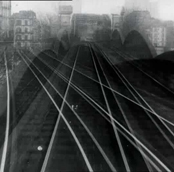 “Suddenly something clicks, everything vanishes and a train appears on the screen. It speeds straight at you—watch out!” The perceptual experience of train travel offered several parallels to the cinema experience, and both will be discussed as part of this month’s Experimental Film Club selection.

Over on the IFI Blog, Daniel Fitzpatrick of the Experimental Film Club has previewed March’s selections focusing on ‘The Train, The Cinema’ with an fantastic essay that traces the some of cinema’s relationships with the train right back to what’s been referred to as cinema’s ‘founding myth’, the screening of and reaction to the Lumiere’s film The Train Arriving at La Ciotat.