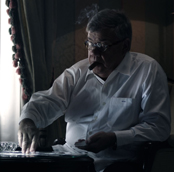 Jean-Yves Ollivier steps out of the shadows IFI

Behind-the-scenes negotiator, Jean-Yves Ollivier, who helped bring stability to southern Africa steps out of the shadows at the IFI

The IFI presents a special preview screening of new documentary PLOT FOR PEACE at 18.30 on March 13th at the Irish Film Institute featuring a Q+A with Jean-Yves Ollivier (alias ‘Monsieur Jacques’). Winner of Best International Feature Documentary at the Galway Film Fleadh 2013, PLOT FOR PEACE is subsequently released exclusively at the IFI on the 14thMarch.

On the surface Jean-Yves Ollivier was just a businessman building contacts in the region, but in reality he was responsible for the behind-the scenes bargaining that was instrumental in securing regional peace and the end of a system of apartheid that threatened to bring the region to its knees.

With exclusive interviews from current and former heads of state, PLOT FOR PEACE reveals a picture of a man integral to the historical negotiations responsible for freeing Mandela, previously hidden from public view and omitted from history. Operating as a life-line for top-secret contacts, Ollivier conceived and organized the exchange of a vast number of political prisoners, directly altering the course of peace talks across Africa.

Revealing an enigmatic character worthy of John le Carré, the film also shows his noble motivations questioned by some, where his discreet negotiations led some to believe he was a double agent. Jean-Yves Ollivier has been bestowed the highest honours by both the last impenitent stalwart of apartheid, P.W. Botha, and the first President of the new South Africa, Nelson Mandela. For the first time, PLOT FOR PEACE tells his extraordinary story.