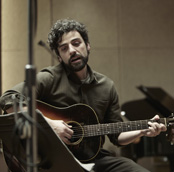 Turn up the volume on the January Blues

January looks set to be a particularly musical month for the IFI with the premiere and release of Inside Llewyn Davis, Synthesis III, and the IFI’s annual collaborations with Trad Fest, all helping to eliminate any residual post-Christmas blues.

Fans of the recent viral video of Justin Timberlake’s rendition of The Auld Triangle can finally catch his performance on the big screen in Inside Llewyn Davis. The eagerly anticipated latest work from director duo Ethan and Joel Coen will have its Irish premiere at the IFI on January 22nd (20.00), in association with Digital Biscuit, before it opens at the IFI on the 24th Jan. An evocative depiction of the New York ‘60s folk scene, Inside Llewyn Davisis centred on a week in the life of a penniless, disillusioned young musician as he navigates his way through Greenwich Village while relying on the kindness of strangers. Starring Oscar Issac in a role that is sure to make him a household name, this is a must-see for fans and newcomers to the Coen brothers’ charming and intriguing style.

For the IFI’s annual collaboration with Trad Fest, a screening of Dónal Ó Céilleachair’s enchanting new documentary, Aisling Gheal (January 25th, 15.00) will give fans of Celtic musical traditions a second chance to see the film after its successful premiere at IFI Stranger Than Fiction 2013 in September. The film sheds light on the sean-nós singing programme in the Munster Gaeltacht and pays particular attention to the relationship between renowned singer/teacher Máire ní Chéileachair and her talented student, 11-year old Shahira Apraku, who will both attend the screening along with director Dónal Ó Céilleachair.

Continuing on with Trad Fest, January’s Archive at Lunchtime has two FREE programmes focusing on traditional music, the 1973 Fleadh Cheoil and the Slogadh Festival in 1977, both from the IFI Irish Film Archive.

The IFI and music production company Fractal offer their third edition in the impressive Synthesis series, as the two join up yet again to explore the connections between music and film with audiovisual works. Synthesis III (January 15th, 18.30) will feature award winning project from German artist Daniel Franke, along with the world premiere of Derek Foott’s new work.