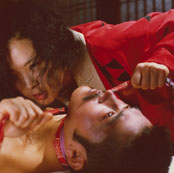 The IFI starts 2014 with three seasons that examine some of the ways cinema has tackled three of society’s greatest vices and most contested pleasures, succinctly summed up in Ian Dury’s famous 1977 lyric that gives this triptych season its title.

The selection for the Sex session mostly come from the 1970s, a period when freedoms won by various liberation movements throughout the world had led to a relaxation of censorship laws in some territories and before the AIDS crisis provoked a more agonised and puritanical approach to representing the sex act in art.

While this group of films includes glorious celebrations of trash such as John Waters’ Female Trouble and head-on explorations of gay culture and relationships such as Frank Ripploch’s Taxi Zum Klo, many of the most memorable explorations of sexual identity of the decade had a decidedly darker tone. Liliana Cavani’s The Night Porter provocatively positioned its exploration of sadomasochism against the backdrop of the Holocaust; Nagisa Ôshima’s In the Realm of the Senses, a graphic account of a lustful true-life affair with shocking consequences became so controversial that it still hasn’t been shown uncut in Japan; and, perhaps most notoriously of all, Pasolini’s final film Salò, or the 12 Days of Sodom, a brutal and powerful depiction of sex used as a means of domination and control, is one of the bleakest and most nihilistic views of nature ever committed to film.

In an age when hardcore pornography is easily available on every mobile phone and the act of buying a pint of milk from the local shop means that highly sexualised images paraded on the magazines stands are unavoidable, it’s perhaps surprising that the films have not lost power to shock and provoke, to intrigue and tantalise, to amuse or appal.

More recent films by John Cameron Mitchell (Shortbus) and Steve McQueen (Shame) are responses to the sex saturation of our times With Alain Guiraudie’s acclaimed cruising film Strangers by the Lake coming in February, and Lars von Trier continuing to tease ahead of revealing the eagerly anticipated Nymphomaniac, to be released in February, sex remains on the brain for some of the world’s most significant filmmakers.

Timed to coincide with the season, January’s From The Vaults screening is I Can’t, I Can’t…, a rarely-seen Irish film written by Lee Dunne which provocatively tackled the contraception debate in Ireland in 1969. When her pregnant mother miscarries her eighth pregnancy and dies on her wedding day, Mady (Tessa Wyatt) refuses to consummate her marriage to Joe (Dennis Waterman) . Subsequent advice from her doctor on contraception leads to a stand-off with her parish priest.

Come back in February for a Drugs hook up and stay tuned for Rock & Roll in March!

Tickets are available now at the IFI Box Office, by telephone on 01 679 3477 or online at www.ifi.ie/sex